A sobering San Francisco Chronicle article yesterday morning confirmed what most Bay Area residents already know: we live in the most expensive rental market in the nation. The numbers tell it all, as rents were up 14.8 percent from 2013 to 2014, with an average rent in San Francisco now $3,129.

Working-class families will soon have no place in San Francisco, especially the increasingly popular Mission District, if things keep going in the same direction. Let’s take the example of a working-class income of $50,000. That’s person’s entire net income would not even cover the average rent of $3,000+. So, without affordable housing options being preserved or created, working-class residents would be displaced from San Francisco.

These working-class community members include professionals such as teachers, who are no longer able to reside in the city where their students live.

Things are even worse for low-income residents, from single-room occupancy (SRO) tenants to low-wage earners. Long-term, locally owned businesses and nonprofits serving the community also suffer displacement. The result is a community that lacks diversity and is no longer inclusive, creating the loss of two attributes for which San Francisco has long been renowned.

On the heels of this dire news, a timely community meeting was held last night at Cesar Chavez Elementary School on Shotwell Street in the Mission. Dolores Street Community Services, the Office of the Mayor (represented by Jeff Buckley, senior advisor to Mayor Lee), the Mayor’s Office of Housing and Community Development (MOHCD), the San Francisco Planning Department and the Office of Economic and Workforce Development (OEWD) joined MEDA in leading the discussion.

Concerned residents packed the school’s auditorium to think up solutions to stem displacement.

A slideshow offered evidence of the rapid gentrification of the Mission, which is ground zero for income disparity in San Francisco.

Some salient points from this Mission Action Plan 2020 slideshow:

Latino population decline: 8,000 Latinos have been displaced from the Mission since 2000 (50 percent of the population in 2000; now less than 40 percent).

Evictions: 2,400 evictions have occurred in the Mission since 2000.

Affordable housing needed: 240 affordable-housing units need to be constructed or preserved each year just to stem the tide of the aforementioned loss because of evictions.

To put a face on eviction, three stories were told from those involved. 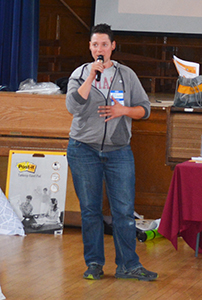 First up was Allison (pictured), a teacher who is being evicted and will no longer be able to live in the city. “If I lose my rent-controlled apartment, I won’t be able to stay,” stated the worried Guerrero Street resident.

Next was Julio, a 15-year Mission resident trying to keep stable housing for himself, his wife and his two daughters, the latter attending Cesar Chavez Elementary School. Julio’s family is being threatened by an Ellis Act eviction.

The last person to speak was Claudia, a single mother and schoolteacher who emphatically stated, “Fighting eviction is the hardest thing I have ever done, but I’m going to school this new owner to show him that what he is doing is not fair.” This lack of fairness includes not fixing the furnace, with carbon monoxide poisoning now an issue.

The crowd then broke into smaller groups of about 10 persons each, to brainstorm on ideas to ease the housing crisis. Topics ranged from housing production and funding strategies to housing stability and displacement. There were 104 ideas in total generated by the groups, with the city agencies and community organizations meeting today to discuss these ideas.

The follow-up event to last night’s meeting will be held at the same venue on June 24th. The community is once again invited to this meeting to work together for solutions to the housing issues in the Mission.