Rocio Bautista, the owner of Inkza Hand Crafts at 2260 Mission St. hurried into the computer lab at the Mission Economic Development Agency on a recent Friday to find a room filled with mostly Latina entrepreneurs with enough savvy to understand they needed to know a business tool that’s second nature to many of their peers — Facebook. 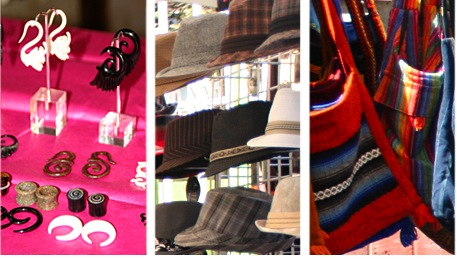 “Eighty percent of the people passing my shop on Mission Street are not interested in crafts. With Facebook I want to reach those who are, ” Bautista said earlier in the week.

So did the others who attended the seminar — a group that included a florist, jeweler, restaurant owner and one of the only men, an optometrist.

It was the first workshop of its kind and Mariana Chuquín, vice president of Missions Small Business Association opened it with corresponding gravitas. ” You will enjoy Facebook, but don’t lose this opportunity to learn to use it to promote your business,” she urged her audience.

Alexandra Ovalle, the computer instructor fromCaminos, a non-profit helping the Latin community to go online, started up her PowerPoint. This was her first time teaching the Facebook workshop developed by the Missions Economic Development Agency and Caminos to bridge the technological gap among Latinos. A recent survey by the Pew Hispanic Center showed that 64 percent of Latinos go online, compared with 78%  percent of non-Latinos.

In the classroom, two dozen concentrated faces followed Ovalle’s step by step instructions. For two artisans from Ecuador in the back of the class, even the Web was new.  Silvia, a woman setting up her own bookshop who declined to use her last name, was one of the few who knew Facebook and while others set up e-mail accounts, she commented on her friend’s activities and pictures. 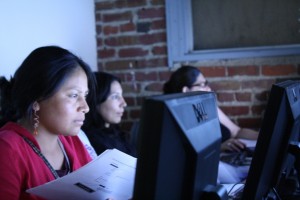 Finally everyone was registered and on the same web page. “With Facebook you can connect with your friends, share pictures with your families overseas and hold pillow fights,” explained Ovalle and then urged everyone to experiment with their wall. “Go on tell your friends how you feel!”

Silvia, the Facebook veteran, shared that she was taking a computer class. Bautista from Inkza Crafts, however, disclosed only a tiny sliver of her inner world; “Estoy feliz,” or I am happy she confessed on her wall.

Soon however, play time was over. It was time to start their own businesses or Facebook groups online. Students focused, and the class fell quiet as they all set up their shops. Minutes passed as they described their products, and why they sold them. Patricia, a woman hoping to go into the aromatherapy business, was stumped. She would continue filling in the Facebook forms at home. She needed a bit more time to think her business through.

When Ovalle wrapped up at 8 p.m. the crowd looked flush from all the information. “Don’t forget to bring your business logo’s and pictures with you for the next workshop on September 17th”, she said.

Like many of the other participants, the page for Inkza Crafts still looked bare but Bautista was brimming with plans. She hoped to show her new collection of hats online and to let future friends know of upcoming sales.

Luis Picuasi, who sells his crafts on Saturdays at the Mission Artisan Market on 24rth street, was thinking big, hoping to use Facebook to sell his crafts abroad.

Chuquín from the Mission Small Business Association looked pleased. “We Latin women need to bring ourselves up to speed, but I never expected so many people to show up tonight,” she said.

By the end of the evening 25 new businesses had opened their virtual doors on the world’s largest social network. Together with her daughter she set out tortillas and snacks to celebrate.