Those were just four of the elements that combined to make ¡VIVA MEDA! a success on Wednesday. This year’s venue was the San Francisco Design Center.

Celebrating 43 years of investing in people in the Mission – and now the Bay Area — it was a night for Board members, staff, funders, clients and friends to take a moment to reflect on the many successes of the past year.

The event began with mingling on the second floor, where a compelling Photo Voice exhibit called “An American Dream?” was staged. To finally let their voices be heard about the Mission District’s housing crisis, eight mothers of young children revealed their lives via a unique combination of photography and storytelling. Attendees were visibly moved by this poignant exhibit.

Once everyone headed downstairs to their elegantly appointed tables, they were welcomed by the emcee for the program portion of the evening, Marcos Gutierrez of Hecho en California radio fame. MEDA Executive Director Luis Granados then took to the podium to echo that welcome to the 300 guests, plus to tell how the past year has been a game-changer for MEDA.

Granados explained, “Our nonprofit is now an affordable housing developer working to retain existing affordable units, while developing new units. We currently have nearly 850 units under our management! We have also become a lender through our Adelante Fund, which provides capital to small businesses, and are now in the process of becoming a CDFI.”

The numbers for the first three quarters of 2016 showcase how MEDA is investing in people. From 40 new homeowners and over $6 million in tax refunds returned to the community to hundreds of units of affordable housing preserved or produced and $721,000 disbursed via 25 Adelante Fund small-business loans, Plaza Adelante has been one very busy neighborhood center this year.

It was then time for five well-deserving honorees to accept plaques commemorating their many successes. Awards were: Janis Bowdler of JPMorgan Chase & Co. for “Community Empowerment”; Sam Ruiz of Mission Neighborhood Centers for “Community Leadership”; MEDA’s Director of Commercial Real Estate Karoleen Feng for “Employee of the Year”; Karina Acevedo and Chuy Magaña as “Family of the Year” (photo, on stage); and Elijah Toluao as “Rising Leader.” Toluao was flanked by his mentor, Ian Lindsay of LinkedIn, who asked the crowd to also consider supporting the low-income community by getting involved, from volunteering to donating a few bucks.

Once the program was complete, it was time for dancing. Few can resist taking to the dance floor at a ¡VIVA MEDA! Gala, and Wednesday night was no different, with Mazacote taking to the stage and filling the venue with their pulsating salsa sounds. In between sets, the music continued with MEDA’s Technology Training Coordinator Leo Sosa spinning (a.k.a, DJ Leonardo).

All in all, a great time was had, with a memorable ¡VIVA MEDA! event.

Now it’s back to work investing in people and building community capital. Time to start making the impact that will be celebrated next fall when MEDA turns 44.

Read full story of our “2016 Family of Year,” Karina Acevedo and Chuy Magaña.

Read full story of our “2016 Rising Leader” Elijah Toluao and his mentor, Ian Lindsay of Linkedin. 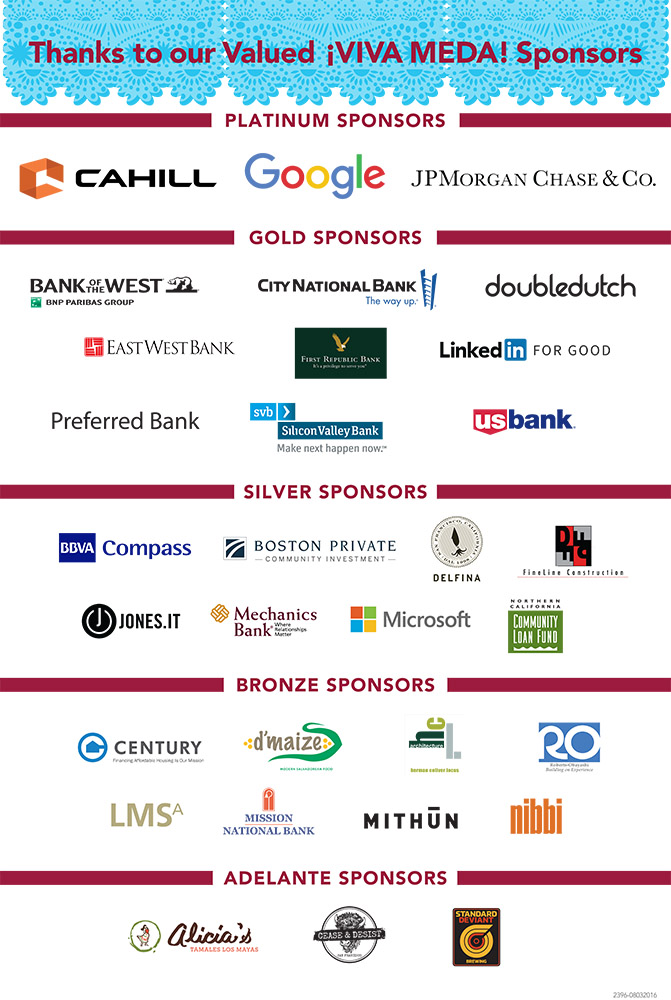