Thousands of Dollars For A Good Cause 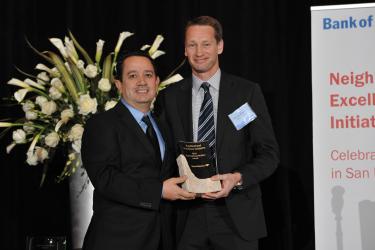 The economy may still be down but two nonprofits, five local heroes and five student leaders received thousands of dollars to do their part to help stimulate it. The Bank of America Charitable Foundation recently announced $450,000 in funding and leadership training through its Neighborhood Excellence Initiative, a national philanthropic program.

“We help people with basic things like improving their credit, reducing their debt, increasing their savings, buying a home and starting a business,” said the agency’s executive director Luis Granados. “The money will continue to strengthen the services that are provided within this center.”

New Door Ventures, is also based in the Mission District and helps train at-risk youth in work and life skills.

“Both of them showed that they could work with other nonprofits to extend their reach,” said Martin Richards, San Francisco market president for Bank of America.

Residents who contributed to their neighborhood through volunteer service and civic engagement were honored as local heroes and each received $5,000 to donate to the nonprofit of their choice.

Suzanne Giraudo, of the West Portal neighborhood, will direct her grant to De Marillac Academy, a tuition-free Catholic school for children in the Tenderloin grades 4 to 8.

“My goal is to help all kids reach their potential and these dollars will help the kids from the Tenderloin who attend the school, do so,” Giraudo said.

Sid Johnson, of the Bayview Hunters Point neighborhood, is a local business owner who has provided employment for youth after school and on weekends. He will give his grant to Pop Warner Little Scholars, Inc./San Francisco Brown Bombers.

Raye Richardson, of Fillmore, opened what is considered the nation’s oldest independently-owned African American bookstore. She will make a donation to the San Francisco African American Chamber of Commerce Foundation.

Steve Rosston created a nonprofit that provides busy people with an opportunity to volunteer. His donation will go to the volunteer group HandsOn Bay Area.

Martha Ryan, of the Mission District, founded a family resource center in San Francisco. She is giving her grant to the Homeless Prenatal Program.