Small-Business Displacements Tearing at the Fabric of Mission Life

These words jump off the pages of a brightly colored brochure touting sales for expensive residences at a 114-unit, gleaming condo building sitting in a prime location on San Francisco’s Mission Street near 22nd.

The same brochure claims, “no detail has been overlooked.” Yet the folks at Vida seem to have overlooked the obvious: the same local businesses that add flavor to the Mission cannot afford the astronomical rents for Vida’s 14,000-square-feet of commercial space. Plus, the circle of affluence that will be created by Vida’s pricey condos translates to the fact that once-entrenched local businesses could soon be a thing of the past.

Ironically, the lamppost in front of Vida is festooned with a banner advising, “Shop Small.” This opportunity will soon be moot in this community without aid from the government, corporations and service agencies.

Take a stroll down today’s Mission Street and you’ll quickly see a tale of two neighborhoods unfold, divergent communities struggling to coexist. The economic divide grows all the greater with each passing day.

Pupuserias sit next to pricey, vegan Mexican restaurants. Dilapidated, single-room-occupancy hotels sit in the shadows of ritzy condo buildings often marketing themselves with culturally sensitive names (for example, “Vida” is Spanish for “Life”), as they feign being part of the rooted community. The 14 MUNI Mission Street bus–packed with many Latinos going to low-wage jobs or to obtain much-need services–competes with polished shuttle buses just one block over on Valencia, tech workers riding in comfort to Silicon Valley, a suburban place they don’t want to live.

Considering a price of $599K for 494-square-foot mini-units (certainly not suitable for families) to a cool $1.094K for 1,145 square feet, this exciting “life” at Vida is hardly meant for most and is definitely not being marketed to the longtime Latino community that made the neighborhood so attractive to newcomers.

A look on Craislist already shows a duo of two-bedroom condos at Vida each renting for $7,499.

The history
San Francisco’s Mission has long been popular as a place where Latino immigrants could come and feel instantly comfortable before becoming part of the fabric of the larger city, state and nation. Many of these newcomers were refugees escaping abject political and economic situations in their homelands of Mexico and Central America.

The welcoming, relatively affordable Mission was where lively conversations among longtime residents occurred block after block. These scenes were played out against a backdrop of colorful murals that reflected the dreams and needs of the populace. A vibrant community, based on promise, had been created over the decades.

Part of that promise was a business environment that abetted the growth of small, community-serving ventures.

This promise has been broken.

At another new condo building, this one on the corner of Valencia and 19th streets, the commercial space hardly serves the community that built the Mission. There are no inexpensive taquerias here. No discount stores selling wares that are affordable for the financially challenged. No hair salons where fifteen bucks can have you leaving well-coiffed.

No, these storefronts feature designer Tom Ford products and juice bars selling eight-ounce elixirs for about 10 bucks a pop. Such high-end tenants are the only ones who can sustain a business model in a commercial climate leaving local, budding entrepreneurs with no place to set up shop in the neighborhood. The numbers just don’t add up for them.

The numbers
Using data from a Q4/14 San Francisco Office Market Report compiled by Colliers International, the San Francisco commercial real estate market is becoming out of reach for small-business owners. The citywide vacancy rate is now under eight percent, from the peak of 15.2 percent in 2010, decreased availability now increasing demand in a red-hot market. Average commercial rental rates citywide are now $64.79 per square foot—a 16.2 percent increase year over year.

Here is a sampling of five Mission District commercial spaces currently for lease:

These are hardly numbers to create an inclusive environment for small-business entrepreneurs looking to make their dream a reality in their neighborhood of choice.

Edwin Rodriguez, MEDA’s Business Development Program Manager, sees many such budding entrepreneurs in the free workshops held at the nonprofit.

“Most of these clients can afford $1,500-2,000 per month in rent to make their business model work. Maybe $4,000 for a restaurant. There are few spaces left at these rates in the Mission,” explains Rodriguez of the challenge for his clients.

One story
Rodriguez recently met Gloria Esteva, who immigrated to the Mission three years ago from Mexico, when she came to attend Business Development workshops at MEDA.

Esteva deemed it best to seek opportunity north of the border when her grandson was diagnosed with leukemia and the doting grandmother knew the youngster would receive better care in the United States.

Unable to find work in San Francisco, possibly due to her advanced age, industrious Gloria decided to start her own business, selling clothing and gift items. To make this business work from scratch, she needed to find a central location at a low price. A small spot was landed on Mission near 24th. By small, we’re talking 66”wide x 253” long—not even 116 square feet and in need of repair. At $200 per month, this was a space that made sense to locate Chipitas, the store Gloria opened to pay for her grandson’s care and to support other family members who later came to the Mission. When her grandson’s leukemia went into remission, Gloria knew her choice to relocate to the Mission was the correct one.

The initial bad news Gloria received was that of a fourfold monthly increase in rent to $800 per month for the tiny space, starting October 2013. Since Gloria had grown her business, working long hours and sans employees, Chipitas was profitable enough to absorb this rent increase.

Then earlier this month, Gloria received a letter from her landlord stating that Chipitas would switch to a month-to-month lease and that the rent would increase to $1,400 per month, starting February 1st.

While a loyal, Latino clientele has been building for this community-serving enterprise, Chipitas is not at the point to make this business model work at this higher rent.

MEDA has connected Gloria to legal services, with the hope of at minimum being able to get the prior lease extended a few months so that she can find a new commercial rental.

Another small business in the Mission is in peril.

Summing up her future, Gloria states: “I would not move my business out of the Mission. I would simply close up shop and try to do something like babysitting. The Mission is my home now. I love the people. Me encanta la gente.”

The advent of solutions
Gloria Esteva represents how community needs for local goods and services have been made secondary to the creation of a boutique restaurant destination geared to tourists and newer, affluent residents. This means most longtime residents can neither afford to dine nor feel welcome in their own neighborhood. Almost every change-of-use permit from retail has been converted to a new restaurant (as demonstrated in Data 3 by the Mission Public Life Plan, chart below). 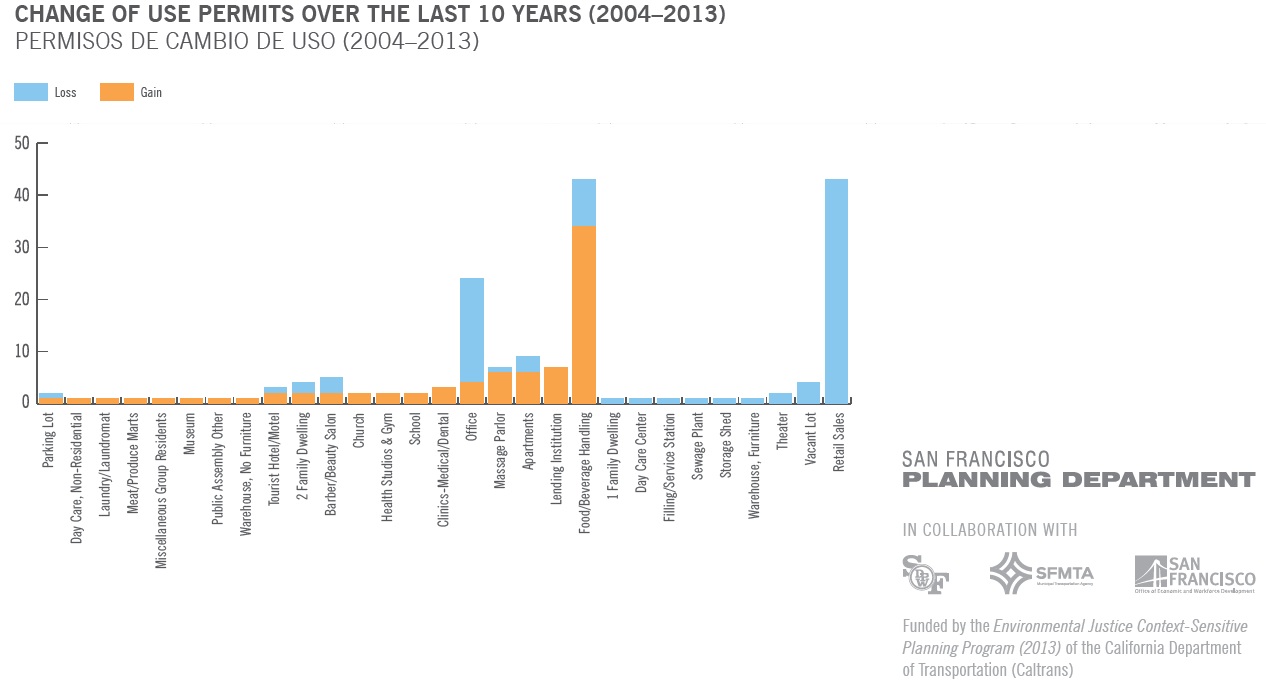 To make matters worse, businesses with long-term community ties, such as Gloria’s Chipitas store, are even more likely to be evicted, as demonstrated by the closed-to-open ratio data from the Budget and Legislative Analyst’s report (chart below). This leaves local residents in a lurch to find affordable replacement goods and services near them, while forcing small entrepreneurs, such as Gloria, scrambling to maintain even their most loyal client base. 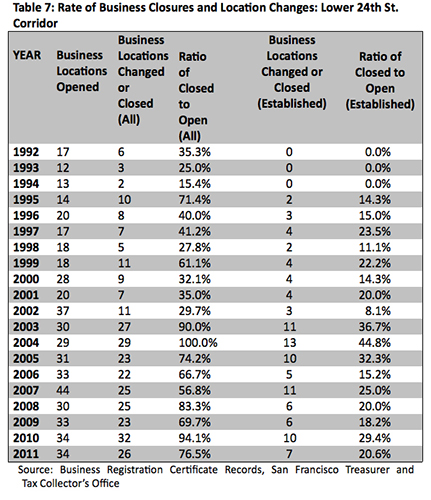 That’s why MEDA has been working with District 9 Supervisor David Campos’ office on legacy-business legislation to protect longtime entrepreneurs and maintain the client-business social capital that has been built over time.

Here are the criteria for a venture being deemed a legacy business:

This is just the start of solutions in the neighborhood. There is much work to be done, but MEDA is committed to helping longtime, community-serving businesses stay in the Mission.