The Evaluation Task
When Severin Saenz of MEDA’s adroit Evaluation Team received a request to delve into tax stats from the 2014 season, she knew some interesting community facts would be ascertained. Little did she realize to what extent.

Saenz was tasked with gleaning information from approximately 3,400 tax returns–prepared for free by MEDA staff and 120 volunteers so far this year–and finding the numbers regarding who could afford to pay today’s fair-market rent. This Free Tax Preparation program would not be possible without the support of the San Francisco Human Services Agency, United Way of the Bay Area and Bank of the West, with additional sponsorship by the IRS, Citi, Charles Schwab and CFSI. Clients are primarily low- and moderate-income Latinos.

What was the evaluation process?

The result? A mere 3.32% of the financially challenged clients who came to MEDA, and its three satellite Volunteer Income Tax Assistance (VITA) sites, could afford to rent a home in San Francisco if they were in need of finding new shelter today. 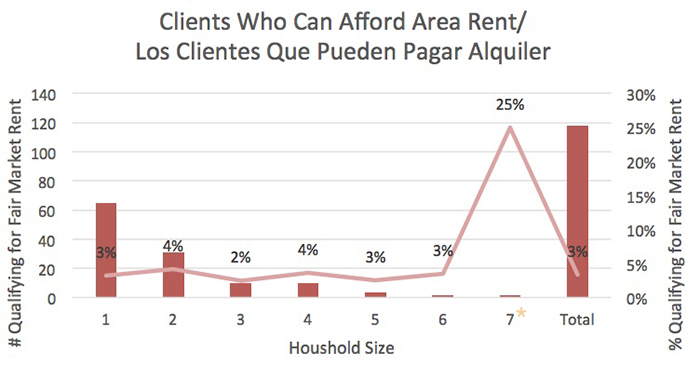 Stress on Long-Time Mission Residents
This paltry number underscores how quickly the demographics of the Mission, and San Francisco at large, are changing because of widening income disparity and the rapid increase in rents. Where the Mission was once a Latino immigrant neighborhood, it is less so every day, causing stress for long-time residents.

This fact was evidenced in March when MEDA facilitated a “Housing Town Hall” at Bryant Elementary School, one of the four Mission Promise Neighborhood schools. At that event– attended by parents, activists and high-powered politicians–MEDA staff heard heartrending stories. Parents were faced with the choice of working two jobs and not seeing their children, but being able to stay in their current rental, or uprooting their children and moving away to somewhere more affordable. This is a no-win situation.

MEDA’s Take on the Housing Crunch
MEDA’s Policy Manager, Gabriel Medina, is all too aware of the community’s housing issues. Medina knows that no new affordable housing has been built in the Mission for over a decade and that the neighborhood has seen evictions increasing.

States Medina of this dire situation as showcased by Saenz’ evaluation data: “10 times as many MEDA clients could afford to pay fair-market rent and it would still be a housing crisis.”

The only way to have housing security is to own. While not an option for far too many, MEDA does offer free workshops for those exploring becoming a first-time homebuyer. MEDA staff even participated in the HomeownershipSF “2014 Housing Expo” on June 14th.

HomeownershipSF Program Manager, Shannon Way, explained the event’s purpose: “I think the city is starting to address housing issues to help maintain its diverse culture. For example, San Francisco increased downpayment funding, through its Downpayment Assistance Loan Program (DALP), to $200,000. There are projects in the pipeline, such as 192 BMR units coming in 2015 at 14th and Mission streets. This is why we held our event.”

MEDA Takes on Community Real Estate
Another bold step taken by MEDA to help ease this housing crisis occurred in March when a partnership with BRIDGE Housing was formed. The goal? To transition 441 units called the Mission-Castro Cluster, currently owned by the San Francisco Housing Authority (SFHA). This undertaking will be led on MEDA’s part by the innovative team of Karoleen Feng, Director of Community Real Estate, Elaine Yee, Senior Project Manager, and Itien Liang, Senior Asset Manager.

MEDA will implement its plan in two phases, as delineated below.

SFHA currently owns these properties, with all residents seniors and/or disabled. The goal is to maintain this housing stock as affordable, plus take on the challenge of doing long-needed repairs, the latter something the city was no longer in a position to do.

This transition is being done under the Rental Assistance Demonstration (RAD) program, which is part of Housing and Urban Development (HUD). All residents are guaranteed to stay in their current apartment; however, in lieu of Section 8 housing, project-based vouchers are given. RAD mandates that a nonprofit housing provider, such as MEDA, can purchase units. There are eight clusters throughout the city, totaling 29 properties, which have been awarded to various nonprofit affordable housing developers through San Francisco’s RAD Portfolio. SFHA maintains ownership of the land beneath the structures, meaning housing is legally bound to remain affordable for 99 years.

Concludes Medina, “MEDA assuming 441 SFHA units will definitely improve housing stability in the near future and get the ball rolling on new affordable-housing production soon after. It’s MEDA’s first step, as we do plan on acquiring more sites in the future to increase the stagnant supply of affordable housing stock in the Mission District.”