John’s family has a long history in the Mission: his grandparents lived in the neighborhood, where John went to school and now works. Andrew is first generation Vietnamese-American, having grown up in the Tenderloin, where as a youngster he whiled away the hours in front of his computer in what was then a much tougher neighborhood. Anh’s parents also hailed from Vietnam, with their daughter choosing to study hospitality management. Then there’s Mohini, originally a science major at UC Berkeley, whose parents emigrated from India. Chris’ dad came from El Salvador, was a painter by trade and eventually landed a job in IT.

What does this diverse group have in common? They were part of a panel of employees from DoubleDutch that yesterday spoke with MEDA’s Mission Techies summer cohort. This free program puts 17- to 24-year-olds on the path to an IT career.

It’s a short, three-block walk from MEDA’s Plaza Adelante to DoubleDutch’s offices at Mission and 22nd streets. A dozen Mission Techies made that stroll, excited to hear how others have gotten jobs in the Bay Area’s ever-growing tech world.

It’s ironic to have a meeting at the offices of an award-winning company that develops apps for meeting planners. DoubleDutch’s products definitely deliver some major ROI. If you were looking for a startup experiencing growth in a niche market, this is the place.

The Mission Techies were first given a tour of the serpentine office space, replete with spectacular views of downtown, Twin Peaks and Potrero Hill. The young adults’ faces lit up as they imagined working with this backdrop, as many DoubleDutchers bring their laptops out on the large terrace—some even working in wooden swings.

Once the panel was convened, the Mission Techies were enthralled by the stories being told. Most of the panelists serendipitously entered the tech world. For example, Andrew was on a flight to Chicago, where the person in the next seat just happened to be the CEO of a San Francisco startup. After chatting across the miles, Andrew was offered an interview and eventually got hired.

John’s experience echoed that of Andrew, with him counseling, “The people you meet will open doors for you. Spin what you know into what a company is looking for.”

Questions ranged from how many hours worked, with Chris chiming in that he often worked for a bit at home at night because he wanted that edge so that he could be excel in his job.

The panelists were relatable for the Mission Techies, who on the walk back to Plaza Adelante unanimously agreed that this experience showed that there is a place for them in the tech world. 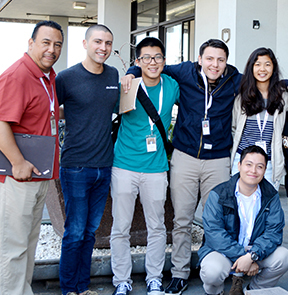 John (photo, second left) spoke on behalf of the DoubleDutchers: “The panelists and I were thrilled to welcome the Mission Techies to DoubleDutch. A few panelists commented afterward that they were a bright group with really impressive questions. We’d love to do this again some time!”