It was a difficult night on January 28th when Ada Olmedo heard about the fire at Mission and 22nd streets. This was where she had been employed for ten years at the local Popeye’s.

All changed in an instant. Ada’s daily routine was no more. The life she knew was gone.

Two days later, Ada found herself at a city-run forum for the 36 displaced businesses and their 71 employees, with the venue the community room at the Mission police station. The city invited MEDA’s Business Development and Workforce Development teams, the latter represented by Job Coach Robert Lopez. After intake forms were completed to assess needs, Ada decided to enlist Lopez in her job search—an astute move on her part, as Lopez immediately got to work, knowing the urgency of the situation.

After refining Ada’s resume, Lopez worked his connections and ascertained that Bi-Rite Market’s 18th Street location in the Mission might be the ideal place for his client. The business had even generously donated food to tenants of the fire who were staying at the Salvation Army shelter on Valencia Street.

States Lopez of his client, “I found Ada reserved and she never complained about her situation. She did everything I asked her to do. Ada mentioned she never received a raise in 10 years of work, plus she was simultaneously working two jobs for about five years. She deserved something good to happen for her.”

Lopez also set up Ada with MEDA’s Financial Capability team so that they could do a benefits screening. This led to Ada being offered benefits for herself and her one-year-old.

“Robert Lopez helped me very much. I appreciate all that MEDA has done for me,” gratefully exclaims Ada.

After being guided through four interviews by the MEDA coach, Ada was hired at Bi-Rite. Her first shift was yesterday and the new employee is already making an impact. 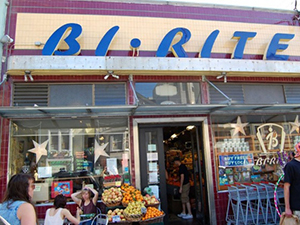 Community Programs Manager Shakirah Simley  of Bi-Rite explains her company’s philosophy and why Ada is such a great fit: “People often ask us, ‘What’s your special sauce? What makes your business so successful?’ It’s our hardworking, amazing staff! We know the best talent can be found right in our neighborhood; 85 percent of our 311 staff live right here in San Francisco. We also want to help folks who have built their lives in San Francisco be able to stay in San Francisco. That starts with Bi-Rite’s job offerings, which include a livable wage and benefits. We’re thrilled to have Ada as a new part of our Bi-Rite family–she’s already rocked it on her first shift and impressed her new team.”

Sums up Lopez, “MEDA staff always work together to do good for the Mission community. I know we will continue to touch lives. If was a gift to see Ada beaming when she told me ‘I never had a job like this before.’ She deserves it!”

(There are 36 businesses and 70 other employees like Ada who need the community’s help after the fire. Please donate, on the Tilt page set up by MEDA, to help businesses that are victims of fires in the Mission.)