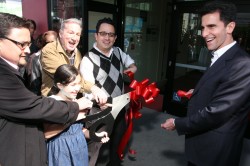 On March 6th, a sunny spring Saturday, 19th Street in San Francisco was filled with the energy and color for which the Mission District is famous. The Mission Economic Development Agency (MEDA) hosted a celebration to commemorate the opening of its new project, Plaza Adelante. Plaza Adelante (http://plazaadelante.org/) is the 21,000 square foot home for MEDA and a group of other nonprofits which include the Mission Asset Fund, Good Samaritan Family Resource Center, and CAMINOS Pathways Learning Center.

To introduce Plaza Adelante to the neighborhood, MEDA held a community festival on 19th Street that included live music, food, games for kids, and a resource fair featuring over 25 community nonprofits. Public officials including Supervisors David Campos and Chris Daly, Assemblyman Tom Ammiano, and State Senator Mark Leno spoke at a press conference and ribbon cutting to recognize the transformational power of the project.

Luis Granados, MEDA’s Executive Director, couldn’t have been happier. “We’re tremendously proud that so many of our neighbors and supporters came out today to celebrate the opening with us. Without them, this project never would have happened,” said Mr. Granados. “The reaction people have had to the project has been great. People have been eager to learn what is happening here and how they can be a part of it.”

Plaza Adelante is an ambitious project with a simple idea, yet critical in a shrinking economy: organizations combining forces under one roof to provide vital services such as homeownership counseling, microenterprise development, financial education, and computer and financial services training in order to maximize the benefit for families seeking ways to build prosperity.

Plaza Adelante is a new model of collaboration where groups share space, streamline administration, and cut down on overhead costs. This allows Plaza Adelante partners to spend more of their resources serving clients. A report by the San Francisco Community-Based Organizations Task Force entitled “Partnering with Nonprofits in Tough Times” came to many of the same conclusions, championing the consolidation of back shop operations and heightened collaboration that will support a more efficient non-profit sector.

In addition to the street festival, MEDA hosted two other events at Plaza Adelante which put the focus on the impact this project can have on San Francisco. On Thursday, March 4th, MEDA hosted a donor appreciation reception featuring a panel of speakers who discussed how Plaza Adelante’s asset development mission fits in with a broader community development agenda. Speakers included San Francisco Supervisor David Campos and Assessor-Recorder Phil Ting; also Heather McCullough, founder of Asset Building Strategies, and Theresa Fay-Bustillos of IdealPhilanthropy, LLC.

On Friday, March 5th, over 70 representatives from Mission District nonprofits convened at Plaza Adelante to participate in a panel discussion focused on the future of nonprofit collaborations in light of decreased funding opportunities. This panel of speakers included San Francisco Supervisors John Avalos and David Campos, as well as Doug Shoemaker, Director of the San Francisco Mayor’s Office of Housing, Amanda Feinstein of the Walter and Elise Haas Fund, and James Head of the San Francisco Foundation.

“With so much uncertainty in the economy and increased demand for our services, we have to be smarter about how we run nonprofits. We need to find ways to innovate with fewer resources and this project is working proactively toward that,” Mr. Granados said. Plaza Adelante’s services are critical to economic recovery, helping families earn, manage and save money, as well as assisting them in building assets for the long term. Critically, all of the center’s services will be offered in English and Spanish, ensuring that Latinos and immigrant families have maximum access to the space and programs.

The Northern California Community Loan Fund provided technical assistance and consulting services to MEDA, in addition to providing a facilities loan which enabled them to purchase the old furniture store and transform it into Plaza Adelante.