Mission Community Rallies at Benefit Concert to Save Displaced Businesses

As she waited in line to donate money at a benefit concert last night, Sonia looked over at the burned-out building on the corner of Mission and 22nd streets, the shuttered-up structure a statement on the changing neighborhood. “I hope these businesses can come back. I loved that place for many years. What will it become?,” the longtime Mission District resident lamented, shaking her head in disbelief as she pulled a donation out of her wallet.

Sonia’s comments echoed the sentiments of the community–a community that came in full force together Sunday night. While the ostensible reason was to hear some impassioned music from three live bands and a deejay, plus to enjoy some tasty food donated by beloved Mission eateries, the real reason was to help the 36 business and their 71 employees displaced by the devastating fire that occurred the evening of January 28th. MEDA has been helping these businesses and employees, most still in limbo about their situations, via short-term and long-term outreach.

The start of the Mission community’s help came from the donation of a space to hold the event. That’s where The Make-Out Room, the popular bar across the street from the catastrophic fire, came to the rescue. There was no cover charge last night—just a request for a donation to the Mission Fire Business Fund, with 100 percent of donations going directly to the victims (and 15 percent of the bar tab went to this cause).

“As a small-business owner, I can empathize with my unfortunate neighbors, who have had their livelihoods reduced to ash in a few short hours. I didn’t hesitate when approached with the idea. Holding a benefit to mitigate their losses is the least I can do in their time of need,” explains Martin Rapalski, owner of The Make-Out Room, of his philanthropic gesture.

There was also a need for sponsors, and numerous Mission mainstays met this need. Gold Sponsor Rainbow Grocery, a neighborhood coop that offers unique health foods, came in. “Rainbow sends our love to those affected by this tragic fire.  For the past 40 years, the Mission District has been our home and our support of this community is very important to us,” explains Jennifer Stocker of Rainbow Grocery about their sponsorship.

This sponsorship was complemented by Silver Sponsor Mission National Bank and a duo of Bronze Sponsors, Dr. Teeth and Electric Mayhem and U.S. Bank. 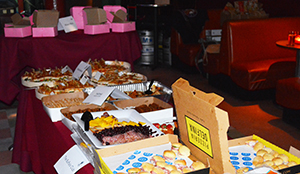 When it came to tasty hors d’oeuvres or gift cards for food to be raffled off, it was time for popular Mission eateries to join the cause: Bi-Rite Market, with their finger sandwiches; Cha Cha Cha offering Latin-inspired cuisine as gift cards; delectable chocolates from Dandelion Chocolate as part of a raffle; Delfina’s Italian specialties; Mission Minis gourmet cupcakes, the business the winner of season seven of “Cupcake Wars”; food vouchers from Pollo Campero; Tartine Bakery & Café’s bread and cookies; and The Buffalo Club’s Italian bar fare.

Doors opened at 6pm, with music starting at 7pm. A steady crowd streamed in all night. Some folks had planned on attending. Others were walking by and were compelled to donate and head inside for their Sunday night when they heard of the tragedy and looked across the street at the fire-damaged building. 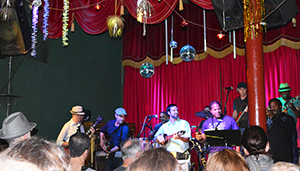 All who entered The Make-Out Room were treated to some special sounds. Titan Ups kicked off the night with their rocksteady/early reggae beat. They were followed by Pangea Futbol Club (pictured), a lively world/fusion band that got the crowd on their feet. Adelante Salsa Band later had the crowd inspired, with the group’s Latin beat making it hard to stay seated. DJ Elembe then took over for the rest of the night, spinning a variety of tunes. All musicians’ time was donated for the night, a grand gesture by a community coming together.

Here’s to the Mission and all who love it. Thank you for rallying to help your neighbors in a time of dire need.

See more pictures from the event.