While it’s a long way from the South Bronx in New York City to South-Central Los Angeles, the landscape of the main commercial strip of any underserved American community showcases a common feature: billboards of happy-looking people of color smoking the popular cigarettes of the day. Citizens need not venture far to transform this message into action, as there is no dearth of purveyors of such products in these neighborhoods.

The issue in San Francisco
This scenario rings true in San Francisco’s southeastern quadrant, from Third Street in the Bayview to serpentine Mission Street, as it winds its way through the heart of the Mission District toward the Excelsior to the south. The Tenderloin, home to many of the city’s single-room occupancy hotels (SRO’s) and lowest-income residents, leads the pack as far as percentage of tobacco purveyors in the city, the neighborhood featuring 27 percent of San Francisco’s shops that sell such merchandise.

Overall, there are about 1,000 tobacco retailers in San Francisco, with 10 percent of these in District 9, which includes the Mission. This represents a saturation of such stores, pushing onto the area’s residents a product that has been long-known to be deleterious to one’s health. This marketing is especially egregious when it comes to the city’s youngest residents: according to the San Francisco Department of Public Health, 60 percent of tobacco outlets citywide are within 1,000 feet of a school, sending the wrong message to this impressionable group. 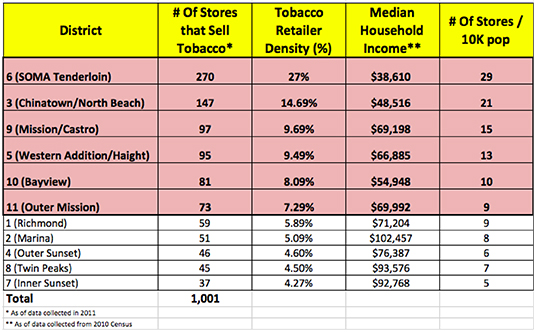 In contrast, a walk down Chestnut Street in the affluent Marina District reveals a very different picture, with few advertisements for tobacco products . . . and many fewer stores selling these goods.

The political background
When politicos and community members commenced the much-needed conversation on how to change this picture of health inequity in San Francisco via novel legislation called the Tobacco Sales Reduction Act, MEDA put out a policy statement that included the following passage:

“Tobacco remains the leading cause of preventable death for San Franciscans.[1] Despite extensive prevention education and policy efforts, 11.6 percent of San Francisco adults continue to smoke.[2] Low-income individuals and communities of color generally have disproportionately higher smoking rates, and higher prevalence of tobacco-related illness and death.[3] In addition to its health impact, tobacco-related death and disease have considerable economic costs. The cost of tobacco-related disease and death in San Francisco is close to $500 million a year.[4]”

Avni Desai, the Mission Promise Neighborhood’s Community Health and Safety Program Manager, advocated for the passage of the Tobacco Sales Reduction Act on behalf of MEDA.

“My role in pushing for the passage of this legislation was that I coordinated young people who were part of a program at the Youth Leadership Institute called the Tobacco Use Reduction Force (TURF). I worked with Supervisor Mar’s office for over a year and half–as well as supervisors Kim, Wiener, Chiu, Cohen, Tang, Avalos and Campos–and brought young people to the politicians’ offices, so that our elected officials could learn about the concerns around tobacco in our community,” explains Desai.

The legislation now passed
This past Tuesday, San Francisco took a giant leap forward–once again being at the vanguard of protecting its citizens–when the Board of Supervisors unanimously passed the Tobacco Sales Reduction Act.

The new law, which puts into effect the most comprehensive controls on tobacco licenses of any city in the nation, does the following:

Concludes a hopeful Desai, “This bold legislation will, over time, create an even playing field in the city’s 11 districts, so that all of our residents have the opportunity to be healthy. MEDA endorsed this policy on behalf of its clients. The reason I gave public testimony to the San Francisco Board of Supervisors was to explain that low-income clients come to MEDA to provide their family with the opportunity to succeed and for their children to achieve. I made the Board understand that ensuring health equity is a vital piece of providing this opportunity.”