“These technologies can make life easier, can let us touch people we might not otherwise.” So said the late Apple visionary and driving force, Steve Jobs. Yet a walk down one of the main drags of San Francisco’s Mission District reveals two worlds attempting to coexist.

At 24th and Valencia, scores of young tech workers clutch strongly brewed coffees as they wait for the bus to take them to the Silicon Valley offices where the world’s next great thing is being developed. Few conversations are had, with most focused on answering their twentieth text on an already-overworked smartphone, even though it’s just 8am.

A short two blocks away on the corner of 22nd Street, a line just as long has formed at the neighborhood Social Security office. A disheveled woman in a wheelchair fronts the queue, already clutching the pen she’ll need to fill out the reams of paperwork that can possibly garner enough federal funds to keep her–one of the community’s many disenfranchised–afloat for another month. Tech gadgets are hard to spot. Perhaps the occasional smartphone can be seen, but it is most likely being used only to answers calls, with no opposable thumbs in rapid-fire motion here. 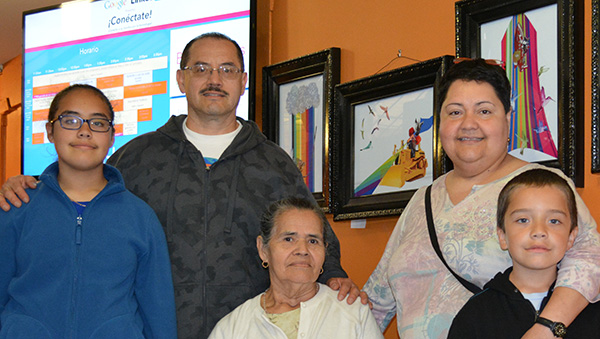 How to bring these worlds together? Today, the Mission Economic Development Agency (MEDA) invited both groups to its Plaza Adelante for a “Get Connected!” event. The brainchild of the nonprofit’s Technology Manager Richard Abisla, the original meaning of this event referred to the agency’s goal of having every household in the Mission connected to low-cost internet and a computing device by 2018. A look around this neighborhood center today revealed a secondary meaning of “Get Connected!,” with tech volunteers generously donating their day off–if they are ever really off the clock–to spend time teaching varying levels of digital literacy to the Mission’s financially challenged, primarily Latino families.

“I am honored to be the impetus behind today’s event, which is part of MEDA’s vision for its federally funded Mission Promise Neighborhood, one of just 12 such programs in the nation.” explained Abisla. “Without access to low-cost broadband, the odds of a student’s academic and economic success are slim. Our family success coaches are based at Cesar Chavez and Bryant elementary schools, Everett Middle School and O’Connell High School, but my mission is to have the entire Mission connected. Technology is for everyone.”

Presented by Google and LinkedIn, with Cisco Meraki and Square also generously taking part, “Get Connected!” had a turnout that exceeded expectations, with over 175 attendees. The 20 volunteers came from throughout the tech world, and even hail from throughout the world. Originally from Germany, Martin Thormann exemplifies the volunteer spirit that helped make today a reality. Martin works as a Senior Software Solutions Advisor with Echo Technologies  Solutions in SoMa. His wife was raised in Colombia and the young couple lives in the Mission. “I’ve been in San Francisco for a decade. I’m always looking for volunteer opportunities in the neighborhood. Today presented the perfect opportunity to give back,” said Thormann.

Then there is Google employee Ben Hutchinson, originally from Australia, who spoke of how honored he was to give back to his new community of choice. As he sat down in MEDA’s Workforce Development Department to help a fellow Mission resident hone a rudimentary resume, Ben extolled his respect for San Francisco’s diversity, much evident in the halls of Plaza Adelante today. 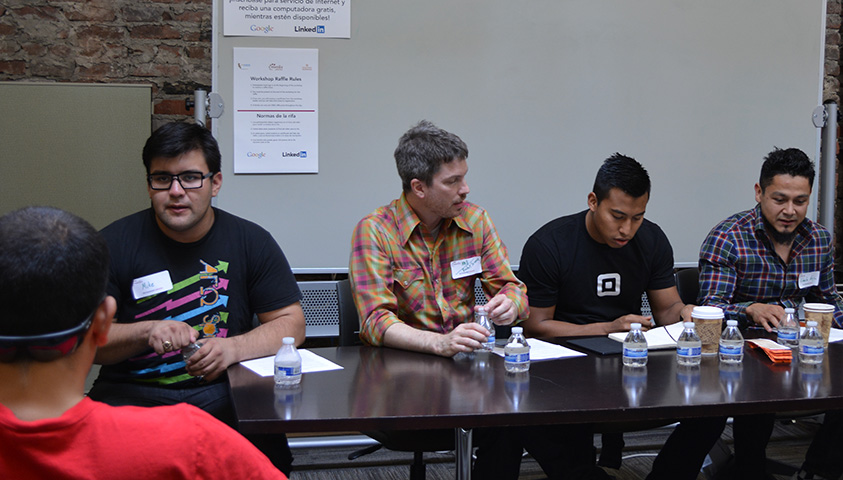 One highlight of the day was the Latino Career Panel, which showcased six major players in the tech world: Hector Mujica, Social Responsibility Strategist at Google; Mike Ponce, Operations Coordinator at Google; Matt McGraw, founder of Rocket Science Consulting;  Luis Carillo, Risk Operations and New Markets at Square; Jackie Garrido, Onboarding Program Manager at Facebook; and Roberto Mejia, IT Support Engineer at Jones IT. The day’s moderator was Aileen Hernandez, TechSF Senior Workforce Development Program Officer for the City and County of San Francisco, with MEDA’s Amelia Martinez acting as translator. An interesting discussion spilled forth, with stories from these influential panel members definitely inspiring hope that the current dearth of Latinos in the tech industry could soon become a thing of the past.

One memorable quote of the day came from Facebook’s Garrido when she emphatically stated, “Don’t underestimate the power of Spanish in tech. The Latino market is growing rapidly.” This statement was backed up by Square’s Carillo, who informed the crowd that the tech company recently launched a complete point of sale and suite of business tools in Spanish for the growing number of Latino sellers across the United States.

The panel’s Roberto Mejia of Jones IT Consulting had an interesting story to tell. Born in El Salvador, he came to the United States as a youngster and, despite having an inherent interest in computers, he never saw a career in tech as an option for a Latino. “There were no role models for me, so I saw a tech career as unattainable. I actually graduated from the University of San Francisco in 2006 with a degree in marketing and communications. I transitioned to an IT career only because a good friend from USF gave me a shot. I am loving it and am proud to now serve as a role model for other Latinos.”

One young adult inspired by the Latino Career Panel was nineteen-year-old Emiliano, who summed it up: “I always felt I couldn’t be part of the tech world. I see all those buses in the neighborhood now. I see people out to change the world. This panel made me realize I can be part of that, too. I learned that MEDA offers free computer classes, so I plan on checking that out soon.”

Workshop participants were appreciative of raffles for supermarket gift cards. Even more appreciation was had for the raffling of 21 computers, which were all donated to MEDA for this event. Also, ReliaTech, which works with  nonprofits, was on hand to sell refurbished computers for just $159; they even fixed computers at no charge. 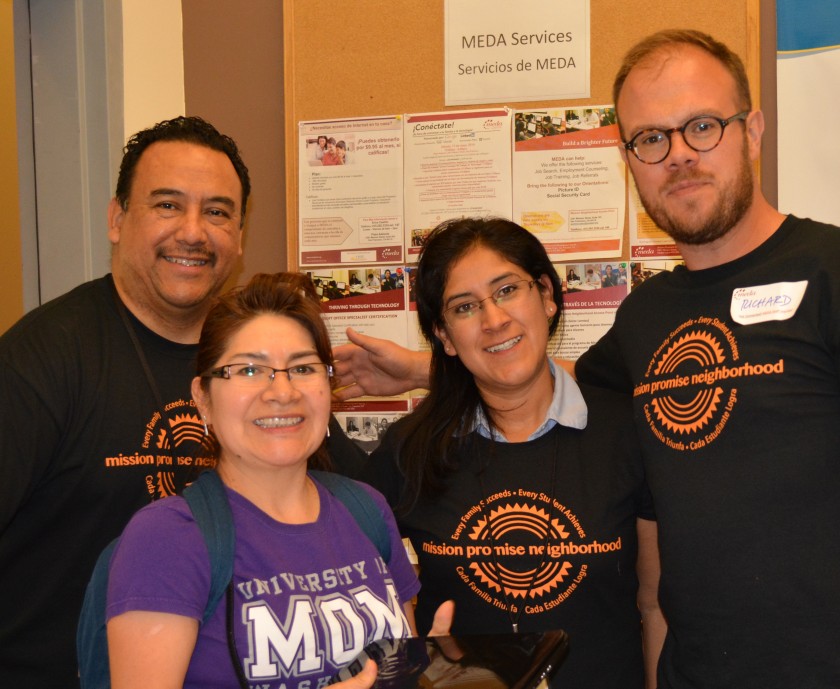 Resource tables were strewn about Plaza Adelante’s paseo, with MEDA partners availing Mission residents of the free services available. MEDA had its own table, with staff volunteers explaining the nonprofit’s effective service integration model that runs the gamut from financial capability and job training to business development and free tax preparation.

There are two more “Get Connected!” events this year, with the next one right before the school year starts in August. MEDA is proud to offer solutions, bringing together two worlds that do not intersect as often as they should, with connections being made in more ways than one.