A Tribute to the Influential Mothers of MEDA Staff, Part 1

On this Mother’s Day weekend, MEDA encourages everyone to take time to celebrate the power of maternal love. We asked MEDA staff to tell what they learned from their mothers and how that made them a better person. Here are a few of the inspiring responses (check back tomorrow for more stories.)

“We recently lost my father and I had the opportunity to reflect not just on my father, but also on my mother as the forces in my life for who I am. I learned from my mother my tenacity, my professional sense and just how to survive in the working world. I remember playing in my mom’s office at an early age while she was at meetings, falling asleep under her desk in this makeshift bed that she created for my brother and me. I remember going to work lunches with my mom where she had serious business meetings, while my brother and I stuffed ourselves and quietly played. I realized that watching my mom at work helped me learn what ‘work’ culture was like.

“More importantly, as my daughter turns one year of age this month, I also now realize that it’s what my mom had to do to take care of us as a working parent. As a working mother, she just did it–bringing up three kids, while also trying to grow a successful career. She retired as a very successful director of a software company that she started and had sold to a large Norwegian company. When she retired, she had many people around her who to this day continue to seek her advice professionally and about life. On this and every Mother’s Day since I was 20, I’ve always dreamed that when I grow up, I wanna be just like my mom. Happy Mother’s Day!” 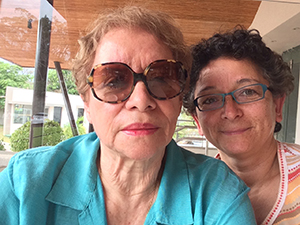 “I was eight years old and it was my first winter in the United States. It was snowing outside and cold–really cold for me, as I was used to the hot days and nights of Costa Rica. My parents were newly divorced and I now had a stepfather in a new country. It was hard for me to make sense of all of the changes in my young life. Only three people understood me at school: my brother and two girls from Cuba. I tried to make sense of the bitter cold, as the snow crept into my shoes and my socks became soaked with icy water. My brother and I stood at the bus stop, anxiously waiting for the bus to appear. Around us were children in their winter parkas, thick gloves and waterproof boots. In contrast, I was shivering as I felt the stares of my schoolmates around me. I wanted to cry, but held back the tears.

“Then, from out of nowhere, my mama came. She trudged through the snow to pick me up in her arms. I remember crying as Mama held me close, while my brother also embraced her. At that moment, my mama was my savior, helping me make sense of my new life. There is nothing more powerful than the love a child feels from their mother each and every day. Happy Mother’s Day to Mama and all of the other mothers who pick up their kids when they need it.” 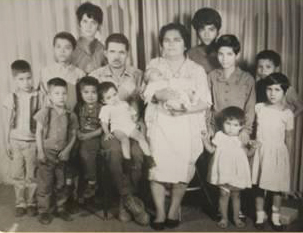 “Family tradition and religion did not allow my mother to choose the direction she wanted in her own life. And she did the best she could with what she had. She made sure her 13 daughters and sons had la escuela she could not have in her youth. At her funeral 15 years ago, we, the family, were in awe at the number of people who showed up and told us how much she meant to them. How she counseled them on the matters of life and how because of her their life was better. She, they said, was like a village consejera.

“My mother had a philosophy to ‘never give advise on delicate matters of the heart, as people know exactly what they need to do. Just listen to them and give them a hug, look into their eyes and tell them you are there for them.’ I feel a deep sense of pride that my mother, despite the obstacles in her life, was a true leader–a true friend to so many. A mother that told me you have no excuses to not achieve in this country. I used to feel so sad every Mother’s Day since she passed. And over time, I began to celebrate her more and be happy in her honor. ¡Feliz Dia de las Madres!”

“My mother wound up raising three boys by herself in New York City. Brooklyn was a tougher place back then, so her life was not easy. This was coupled with her having to work to keep us all fed and housed, as my mother received no other support. While I had only one parent in my life, I have always looked at the glass as half full. Many of my friends had two parents and didn’t like either of them. I am blessed in that my mother is one of my best friends.

“When my mother finally retired, I asked her how she wanted to write the last chapter of her life. Without hesitation, she stated, ‘It’s time for me to give back.’ I was taken aback, as she had such a raw deal for so many years. Always one to walk the talk, my mother does everything from availing HIV clients of services to setting up vanpools for elderly residents who can no longer drive. The main lesson I learned from my mother is that the most deplorable quality of all is a sense of entitlement; instead, everything must be earned. My mother has definitely earned my respect. The thing for which I most respect my mother is that when I was a 24-year-old moving from New York to California–a place I had never been, knew nobody and where I did not have a job–she neither made me feel impetuous nor guilty for leaving in that manner. She put aside her fears for her child, trusted she had raised him well and simply stated, ‘Go make your life.’ That selflessness truly defines maternal love.”