¡VIVA MEDA! Celebrates 41 Years of Service to the Latino Community

“The organization MEDA is in 2014 is different than it was in 2013,” reflects Executive Director Luis Granados on the nonprofit’s work serving low-income Latinos in the Mission District.

Granados’ statement is definitely true, the juxtaposition all the greater when comparing the organization of five years ago to that of today. From two programs to eight, 1,224 client to 5,094, 14 staff to 60, a $1.6 million budget to one of $9.2 million: MEDA has moved forward in a big way (watch video). 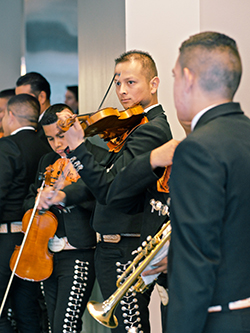 There were over 300 attendees at last night’s gala, held at Yoshi’s on Fillmore Street in San Francisco. This venue was abuzz with activity, with music ranging from a mariachi band to a salsa group to MEDA’s own DJ Leo Sosa inspiring the crowd. This was complemented by Latin-Asian fusion cuisine and cakes from a MEDA Business Development program client, Carla Garcia of Bris’s Creations.

A quartet of honorees, all contributors to MEDA’s upward trajectory, took to the stage to receive an Adelante Award: Kevin Stein, Associate Director of the California Reinvestment Coalition; Mario Paz, Executive Director of Good Samaritan Family Resource Center; Pamela H. David, at the helm of the Walter & Elise Hass Fund; and Angela Glover Blackwell, Founder and CEO of PolicyLink.

This renowned group was followed by MEDA’s “Client of the Year.” 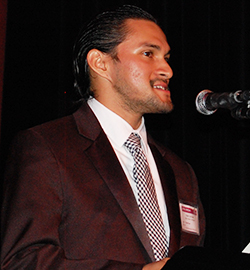 At only 20 years old, Edwin Gonzales left behind his homeland of El Salvador to find a better life in America. He dreamed of applying his lifelong passion for computers to a job in the tech sector. Arriving in San Francisco, Edwin’s language barrier and lack of formal IT training made him believe that his dream was impossible. He worked in a restaurant in the Fisherman’s Wharf area for nearly three years, until a friend availed the immigrant about MEDA’s free services (65 percent of MEDA’s clients are immigrants).

Edwin registered for MEDA’s free, bilingual Workforce Development program called Mission Techies, a 12-week training course for entry-level jobs in the tech sector. In under six months, Edwin graduated from this Young Adult program, completed a three-month internship and was hired by Jones IT, an IT support company.

The crowd was palpably moved by this client success story–showcased via video and a speech by Gonzales–which perfectly characterizes the work done at MEDA every day.

A great time was had by all last night, as evidenced by our photo gallery, but today is another day at MEDA, with new clients walking through the welcoming doors of Plaza Adelante to make their dreams come true.

MEDA is here to help.