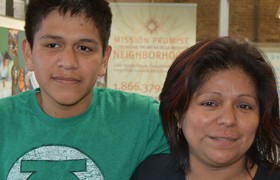 Single mother Ana Alfaro made the difficult decision to leave her native Guatemala with her son, Jose, with the hope of a better life for her small family. The transition proved traumatic for Jose; this was coupled with a speech impediment that led to the monolingual Spanish-speaking adolescent being ridiculed by fellow students at the eighth-grader’s new place of learning, San Francisco’s Everett Middle School.

These issues led to a referral from the Special Education Department to Mission Promise Neighborhood’s Roberto Aparicio, one of a quartet of highly trained family success coaches, whose job it is to help families succeed so that students can achieve.

“My role is to connect families to needed services in the community, at MEDA’s Plaza Adelante and 26 partners in the Mission,” explains Aparicio.

That is exactly what Aparico did for the Alfaro family, leading to important referrals to services.

“Being able to speak their language and to relate culturally helped Ana and Jose relate to me,” continues Aparicio.

Jose was connected to an after-school program for accelerated academic support.

Ana accessed MPN partner Support for Families of Children with Disabilities, where she learned to advocate for Jose at Independent Education Plan (IEP) meetings, plus she was connected with a caseworker. Aparicio also counseled Ana to go to Taxes Plus: Go Further with MEDA, where free tax preparation was available. This was Ana’s initial foray into doing taxes—and a big step forward on the path to financial health. The doting mother was also advised about the process for sending in FAFSA applications when Jose is ready to head off to college in a few years.

The good news: Jose is now fitting in more during his second year of schooling in the U.S. Aparicio continues to work with the young man, with the ultimate goal of ensuring the latter eventually graduates from a four-year college. That would be a dream come true for Ana, who sacrificed so much so that Jose could have a better life.

Ana remains an ardent advocate for her son’s education. She is now transferring her experience into disseminating information in the Mission as a promotora for MPN, under the guidance of Community Engagement Manager Teresa Morales.

Sums up Morales: “Ana was instrumental in reaching families for MPN’s neighborhood survey last spring. She also participated at last August’s “Backpack Giveaway,” where over 2,000 Mission families received items to start the school year off right. Ana is succeeding, and now she is definitely paying it forward!”