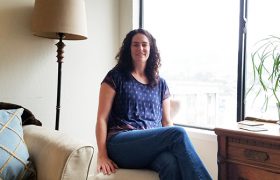 When Shannon Noonan was a curious 7-year-old, a trip to San Francisco turned into more than a family vacation. It defined her life.

That’s because Shannon sensed a freedom that led to her later becoming a teenager preoccuupied with all things related to San Francisco history, from reading about the Summer of Love to jamming to the Grateful Dead.

When it was time to head from SoCal to grad school, the obvious — actually, only — choice was San Francisco State, where she received a master’s degree in counseling 13 years back.

After graduation, Shannon was determined to make San Francisco her permanent home.

Like the majority of San Franciscans, that meant living with others in tight quarters. This included a 10-year stint with a couple of roommates in a three-bedroom, one-bathroom flat in San Francisco’s Sunset District.

A good relationship with the landlord turned challenging when the latter seemingly became allergic to everything, with her overly concerned with the scents emanating from her upstairs tenants.

“We would get emails and calls, at all hours of the day, telling us to not use things like Pine-Sol or Bounce Dryer Sheets. Or that we couldn’t park in the garage anymore because she had become allergic to car tires. It felt like borderline harassment, so much so that I was compelled to contact the Rent Board to learn my rights as a tenant,” laments Shannon.

Added to having an allergy-ridden landlord was that the notion of living with roommates as a soon-to-be 40-year-old was less than appealing. So, no longer wanting to worry about who was drinking her milk, it was time to explore options.

Shannon was luckier than most, having a friend who was a loan officer well versed in all things San Francisco real estate. That imparted knowledge was coupled by the six-hour First-Time Homebuyers workshop Shannon attended the second Saturday of the month at MEDA. This workshop is offered in English and Spanish.

Shannon says, “The First-Time Homebuyers workshop at MEDA was amazing. I learned so many things about homeownership. Honestly, everyone should sign up for it to learn their options for affordable housing in San Francisco.”

Shannon also received free one-on-one coaching from MEDA Housing Opportunities Coach Diana Mayorga. It was Mayorga’s task to clarify the options for someone in Shannon’s situation: She was single without children, with a middle-class income, having worked in the nonprofit sector her entire career.

Shannon enjoyed her job, which afforded her the opportunity to give back to the community she loved. She ran the Boys & Girls Club in the Tenderloin for a while, then did college counseling at low-income San Francisco public high schools, availing students of color of how college could be an option for them. For the past seven years, Shannon has managed the diversity and outreach programs at the Gladstone Institutes, a nonprofit that is part of the University of California, San Francisco. Her job is to inspire low-income kids to don lab coats and conduct science experiments.

Since she was middle income by San Francisco standards, Shannon needed to be creative to buy her first home. The City program that most helped Shannon is the Downpayment Assistance Loan Program (DALP). This program provides downpayment assistance, in the form of a deferred payment loan up to $375,000, to qualified low- and middle-income first-time homebuyers for the purchase of a market-rate principal residence in San Francisco. The DALP is a silent second loan that requires no monthly payments for 30 years. The principal amount, plus an equitable share of appreciation, becomes due and payable at the end of the term, or repaid upon sale or transfer.

Knowing she would need two loans, which makes for a longer close, Shannon penned a heartfelt letter to sellers, asking them to work with that protracted time period so that she could stay in her beloved San Francisco.

The result? Shannon is in a brand-new $450,000, 850-square-foot, one-bedroom condo in an eight-unit building in San Francisco’s Excelsior neighborhood. She has already built $200,000 in equity, offering flexibility for retirement options years from now.

Shannon no longer worries about being displaced, claiming that if she had not been able to buy her first home, a move to Daly City or the East Bay would have been her sole option to find an apartment where she could finally live on her own.

“I feel completely settled. Being able to stay in San Francisco has even helped me progress in my career. I live 15 minutes away from my job. I never wanted to leave San Francisco, and now I never have to do so,” sums up Shannon, who no longer fears eviction, and now has nobody except herself to blame for that empty milk carton.