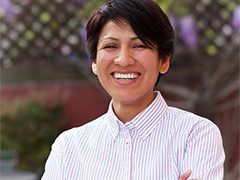 Patricia Narciso’s love of alfajores began as a child. Her beloved mother used to sell the dessert as a vendor on the streets of their hometown, using a traditional, mouthwatering recipe that combines dulce de leche sprinkled with powdered sugar. Additionally, Patricia would while away the hours enthralled by pastry chefs on television.

The journey to MEDA for Patricia began around the need to find affordable and stable housing. Living in less-than-ideal conditions, she started working with MEDA’s Community Initiatives Manager Dairo Romero. He explained the City’s DAHLIA process, overseen by the Mayor’s Office of Housing and Community Development (MOHCD). Patricia was thrilled when she learned she had drawn number six for a new development in SoMa, where she now resides in a studio she can call home.

The budding entrepreneur was also looking to scale her business, and she is well on her way with free technical assistance coupled with a $5,000 mini-grant from the San Francisco Women’s Entrepreneurship Fund. MEDA oversees that fund with the City’s Office of Economic and Workforce Development. Patricia used the money to purchase a delivery vehicle; she had previously been limited in her service area because she could take only public transit to make deliveries.

Patricia’s offerings run the gamut from corporate gifts to wedding treats to birthday party desserts. She has created an online presence for ordering.

For the recent !VIVA MEDA! 46 gala, Patricia even baked some of her tasty alfajores, which were a big hit with attendees.