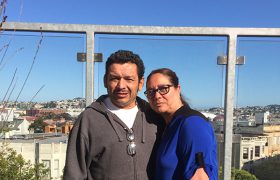 The nightmares persist after more than two years.

Jorge Flores can still see his hair on fire as he bangs on the next-door neighbor’s door at 22nd and Mission streets. His family’s third-floor apartment of 19 years was in flames, along with the rest of the historic building. It seemed like an apocalypse.

Jorge waited with his neighbors on a fire escape, trapped because the emergency ladder wouldn’t release. “It felt like an eternity,” explains Jorge of how he feared for his life as he waited for firefighters to rescue him.

Wife Lucia was a half-mile away at St Luke’s Hospital, anticipating the birth of her fourth grandchild. A blessed event quickly turned into Lucia’s own nightmare when one of her sons called to check on his parents. Turns out a friend called to tell him that there was a four-alarm fire at 22nd and Mission, where the four Flores siblings had been raised.

A terrified Lucia eventually headed over to a different hospital: the Bothin Burn Center at St. Francis Memorial. When she walked into the room, Lucia barely recognized her husband. “Jorge was red and black all over. There were burns on his hands, and he was unconscious,” says a tearful Lucia, still shaking her head in disbelief.

Nine days later, Jorge left the hospital to recover at a hotel for two weeks, with costs covered by the City. The Floreses later headed over to the Salvation Army facility on Valencia Street, which offered temporary shelter to all 60 fire survivors. He and Lucia now shared different quarters with their longtime neighbors, including a large number who like the Floreses had emigrated from El Salvador. While empathy filled the room, it was accompanied by uncertainty.

The aftermath of the tragedy proved to be equally terrifying as the night of the fire on Jan. 28, 2015. Their landlord allowed the Floreses to re-enter their charred one-bedroom apartment to salvage any belongings. Most items were ruined from a combination of the flames and the noxious smoke. While an iMac computer somehow survived and sat unscathed in the middle of the living room, a sentimental Lucia immediately headed for a closet where she had stored a photo collage in a large frame. This wasn’t just any grouping of pictures in a frame: These were a lifetime of photos that had been displayed at her late son’s funeral. Thankfully, the images were intact, as the devoted mother had carefully wrapped the frame in plastic for safekeeping.

Life at 22nd and Mission versus Park Merced
Leaving Central America had been a challenge. Jorge left alone in 1990, with his wife and four children joining him six years later. They made their home at 22nd and Mission, welcomed by a community of other newcomers all with a shared dream of working hard and making a better life in the States.

“There was even a Salvadoran restaurant in the building,” Jorge fondly remembers.

The location proved an idyllic place to raise a family, the Mission offering enough that reminded them of their homeland, while also being a neighborhood of opportunity.

That life contrasts with what Jorge and Lucia found once relocated from the Salvation Army shelter. While grateful when the City helped them find temporary accommodations, the apartment was at Park Merced, in the far southwestern part of San Francisco. Plus, the monthly rent was $600 more than they had been paying, with additional costs for water, utilities and even landscapers. Luckily, the couple’s portion of monies disbursed from a successful $165,000 GoFundMe campaign, started by community resident Zack Crockett, helped the Floreses replace some of their destroyed furniture, household items and clothes.

Then there were travel costs. It was taking Jorge 40 minutes to get to his valet job on Van Ness, adding a half hour to his former commute. Lucia now had a three-hour round-trip trek on public transportation to her part-time job at Fisherman’s Wharf. The couple toiled extra hours to make ends meet at Park Merced, which definitely did not feel like home — even after two years.

Lucia still made weekly trips to the Mission. She shopped for groceries. Went to the bank. Visited friends.

The Floreses longed to be near the Mission again.

A new life at Venn
While all displaced residents at 22nd and Mission streets have the legal right to return once a new building in constructed, the still-barren lot provides daily evidence that this will be a long time coming. That is why MEDA has been working with these fire survivors to help them get into below-market-rate (BMR) rentals, as their City relocation is expiring.

Community Planning Manager Dario Romero helped the Flores family fill out numerous BMR applications. He also joined Lucia on interviews, assisted in the submission of documents and helped appeal an initial denial to obtain a BMR. Most importantly, Romero assisted the family in getting a certificate of preference for being displaced by the fire — the same certificate of preference offered to those who experience a no-fault eviction. That paperwork translated to the Floreses winning four lotteries; they chose Venn at 1844 Market St. near Octavia, a new building near the Mission and loaded with amenities, including a rooftop terrace with panoramic views (photo). The first time one of their sons dropped by after the couple’s May 24 move-in date, he uttered one word over and over. That word was, “Wow.”

Jorge and Lucia are enjoying life at Venn, now living in a one-bedroom flat with a small balcony. Everything is brand-new and their rent is definitely reasonable by San Francisco standards.

The Floreses are quite pleased to see smoke detectors and other safety items in their unit and the building’s common areas. This helps them feel more secure.

These are the first survivors of the fire from 22nd and Mission to get into a BMR rental. The Floreses encourage other survivors to apply.

Conclusion
Jorge’s physical scars have healed, but the psychological ones remain.

Lucia explains, “We get nervous whenever we hear fire engines. We are on the third floor, and my husband is constantly thinking of how he would escape in another fire.”

He and Lucia also long to live in the Mission again. They miss their community, and the life they knew for almost two decades. They hope someday they’ll be able to make it back to 22nd and Mission, as is their legal right.

“For now, I am planning on buying a bike so I can ride over to the Mission, especially to Mission Playground, where I used to play soccer every day. The Mission is still home,” concludes Jorge.