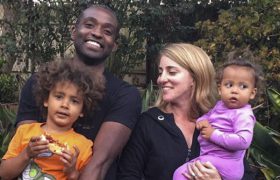 Bridget Early has been a social worker at Everett Middle School in San Francisco for the past nine years, following in the footsteps of her parents, who were both educators. Raised a few hours north in Chico, Early relished her childhood outings to the Bay Area with her folks. These trips solidified one idea: that she would one day live in San Francisco.

That dream became a reality 15 years ago.

Apartment living proves tough
Early met Bay Area native Kai King a decade ago. King also works in education, as a teacher at a private school in the city.

The couple lived in an apartment in the Richmond District, but were evicted via owner move-in a year and a half ago. At the time, Early was seven months pregnant with her second child. Talk about stress.

While a new apartment was eventually found, it was tiny place in the Inner Sunset for $600 a month more — cramping the family’s space and budget.

Hearing of Early’s plight, proponents of the November 2015 ballot’s Proposition A asked the politically savvy social worker to be a spokesperson on the need for passage of the $310 million bond for affordable housing in San Francisco. There was a commercial. A picture in a voter pamphlet.

The measure passed, with three-quarters of votes in the affirmative.

Despite relishing a citywide victory, life in that Inner Sunset flat remained tough. Kids like to jump. They drop toys. The neighbor below wasn’t amused.

“I was constantly telling my kids to stop being kids. That didn’t make sense,” explains Early.

The only solution was for Early and King to buy a single-family home.

Would that even be possible?

A numbers game
According to San Francisco Unified School District data, the 2016-2017 school year starting salary for teachers with a Bachelor’s degree was $52,657; for a teacher with 13 years of service, that jumps to $61,999. This translates to a San Francisco teacher’s salary being about half of the $103,000 a software engineer makes in the city, according to NerdWallet numbers.

CurbedSF calculations showcased that just 11 percent of San Francisco households can afford a home. That compares to 58 percent nationwide. The same story also indicated that $254,000 was the minimum qualifying household income needed to buy a home, based on median sale price in San Francisco.

Time for Early’s family to pack up and head out of town to find that home with the white picket fence, right? Not so fast.

The plan
Things sure changed with the help of MEDA’s free Housing Opportunities program, coupled with revised guidelines and qualifications from the Mayor’s Office of Housing and Community Development (MOHCD). This translated to the family of four recently moving into a three-bedroom, one-bath Outer Sunset home. In San Francisco. As two teachers.

When Early originally came to MEDA’s First-Time Homebuyers workshop two years ago, she found that she didn’t qualify for MOHCD programs, as her household income was actually a bit too high. When Early heard of the changes, she knew it was time for she and her husband to come back to MEDA to explore options once again. The couple received one-on-one coaching from Housing Opportunities Program Manager Juan Diego Castro.

“I knew the City had recently changed guidelines and increased available monies to assist homebuyers, as a way to get more San Franciscans into their first place. When I met with this family, I crunched the numbers and saw that we could now make this work,” explains Castro.

One big factor was the Downpayment Assistance Loan Program (DALP) increasing from $200,000 to $375,000 last July 5. Additionally, MOHCD raised household income ceilings to 175 percent of Area Median Income (AMI) to broaden eligibility to qualify for DALP. That meant a four-person household, like Early’s family, could earn up to $169,650 per year and still qualify for DALP assistance. That was up $40,400 from the prior cap.

A DALP loan must follow a first mortgage, which is required to be a 30-year, fixed-rate loan from a lender approved by the City. Also, a DALP loan must be paid back, along with part of the calculated appreciation value, whenever the home is sold.

The DALP changes meant there was now a workable plan in place.

The future
Early lights up every time she sees Desmond and Ellie frolicking in the yard of their new home, located near the ocean and Golden Gate Park.

“I feel like my kids are now free to play and be themselves. There will also be the freedom that comes with being raised in the liberal, accepting place that is San Francisco,” says Early of how her clan’s future has completely changed.

Early plans on cooking a Thanksgiving meal in her new home next week. Her family will be making that trip down from Chico, plus King’s mother will join them. There is an old-school kitchen in the 1940’s property, with two ovens, one above the other.

“I can’t wait to be in my own home for Thanksgiving. Those double ovens are primed for cooking a big meal. I am grateful … and settled,” concludes an elated Early.