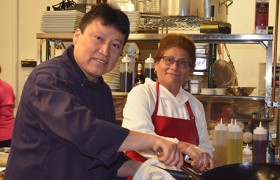 Back in his native Peru, Yeral Caldas’ industrious mother was always running her own businesses in Lima, which varied based on market demand. Sometimes she would sell vegetables; other times she would bring items down from the Highlands and sell them in bulk. Then there was Yeral’s father, who ran a restaurant where he served the traditional dishes of Peru. Add to the mix Yeral’s aunt–his father’s sister-in-law–who made quite the ceviche.

“It was an all-around family learning experience that gave me passion for the restaurant business,” explains Yeral.

After emigrating to the U.S., Yeral brought his dreams of entrepreneurship to MEDA’s free Business Development program. He studied hard in workshops and has been counseled over time by MEDA’s Edwin Rodriguez, Sabrina Haman and Dairo Romero.

Yeral started consistently setting aside money from his paychecks working at Daily Grill near San Francisco’s Union Square. That’s how he was able to purchase the equipment needed when he eventually opened his modest space in the microbusiness incubator named El Mercadito, located in MEDA’s Plaza Adelante, the Mission neighborhood center.

That eatery, Cholo Soy, is packed most afternoons, with everyone from Peruvian expats to techie newcomers enjoying Yeral’s renowned ceviche, inspired by his aunt. When Zagat reviewed Cholo Soy a year ago, they called it “a gem that has wide appeal” and touted dishes as “hearty and affordable.”

In addition to that classic ceviche is the equally popular seco de cordero, a lamb dish in a cilantro sauce. “I have a secret ingredient that makes my seco de cordero special, but I can’t tell you what it is,” states Yeral with a chuckle.

There was no secret ingredient to making Yeral’s dreams a reality: some long days of planning were peppered with a dash of determination. Yeral longed to open a restaurant in a commercial space in his beloved Mission community.

That determination has led to El Ají, located on Mission Street near Cesar Chavez. A grand opening was held last night (photo gallery), with numerous City officials on hand. There was William Ortiz-Cartagena, who currently serves on the San Francisco Small Business Commission. Diana Bernal Ponce De Leon, Project Manager, Office of Economic and Workforce Development at City and County of San Francisco was also in attendance, sampling authentic Peruvian cuisine. Even District 9 Supervisor David Campos stopped by to present a proclamation, from the San Francisco Board of Supervisors, welcoming Yeral’s business to the neighborhood.

Stated Campos, “This is a tough time in this neighborhood in San Francisco. So many small businesses are being pushed out. In the middle of that, Yeral and his family open a full-service restaurant in the Mission. This gives us all hope. It is possible.”

Besides Yeral’s tenacity, what also made this possible was a collaboration of community-based organizations that pitched in to help. Besides MEDA’s help with a business plan, Mission Asset Fund helped Yeral build his credit, Opportunity Fund helped with a loan and La Cocina invited the innovative chef to showcase his cuisine at a street food festival.

MEDA Business Development Program Manager Edwin Rodriguez spoke of Yeral’s success: “The opening of El Ají means that everyone with desire, willingness and dedication can achieve their dreams. Yeral demonstrates that working with a goal in mind and taking step-by-step actions, anyone can open and manage a business and contribute to the community in creating more jobs. I would like to see more Yerals in our Business Development program at MEDA. I would like to see people who are selling food on Mission Street come to our program and receive our free assistance. They should come out of the dark and formalize their business.”

When Yeral addressed the crowd, a wide smile crossed his face. He expressed his thanks by saying, “I am grateful to all the organizations that helped me. I am committed to making this business a success!”

There is no doubt that this will be the case.