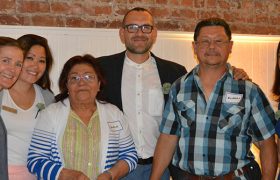 It was with trepidation that Rudy and Karen Sorto (photo, second right and third left) came to MEDA requesting translation of a letter found posted on their front door at 1411 Florida in the Mission. MEDA’s Small Sites Program team explained that the building was now for sale, but assured the couple that the current owner would not be able to evict them without just cause.

MEDA went over the three possible scenarios this family could expect if the building was purchased by anyone other than a nonprofit using the Small Sites Program:

MEDA immediately signed up the Sortos for below-market-rate (BMR) rental opportunities and asked that they contact the Small Sites Program team should there be any further developments, such as a negotiated buy-out. A call was immediately made to the seller’s agent, and to the Mayor’s Office of Housing and Community Development (MOHCD) for Small Sites Program approval. After a month of negotiations, MEDA was successfully able to get into contract on 1411 Florida, meaning all residents of the building’s six units, including the Sortas, could stay in their longtime homes.

MEDA knew that the San Francisco Housing Accelerator Fund (SFHAF) was preparing to come online soon, spearheaded by Rebecca Foster (photo, left). SFHAF is an innovative public-private partnership with the city of San Francisco, local foundations, private lending institutions and corporations, with a mission “to preserve and expand quality affordable housing. MEDA knew 1411 Florida would be an excellent candidate for SFHAF financing to help with an Additional Dwelling Unit (ADU) conversion and extensive capital improvements prior to Small Sites Program conversion.

Additionally, MEDA learned of Mrs. Sorto’s mobility issues, a problem since she is living on the third floor. We therefore offered the ground-floor apartment to the Sortos once the unit is constructed.

In the Sorto family’s own words:
“We have lived in our apartment for over 27 years, but know of many Mission residents like us who have had to move from San Francisco once their buildings were sold. That’s why we feared the same would happen to us. Although we have done everything to stay in this country, such as becoming citizens eight years ago, our only option would be to return to our home country, where things are very dangerous and unsafe right now.

“Throughout this process, MEDA helped us apply for BMR rentals as a back-up plan in the event the organization could not buy our building. We were not looking forward to moving to a new, unfamiliar neighborhood through the BMR program, but it was better than having to leave the city we love. We left fate in God’s hands and prayed for the best outcome. When we got the call that MEDA had become the new owner of 1411 Florida, we breathed a collective sigh of relief. Our family is very grateful to MEDA for their support throughout this entire stressful period in our lives. I also want to add that a week after hearing the good news, we received a letter stating that we were selected for a BMR. We were very happy to pass the opportunity on to another deserving applicant, as we now get to stay in our home!”