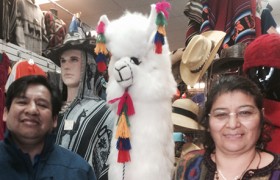 Raul and Juana Ttito immigrated to the U.S. eight years ago, the doting parents looking to follow their grown daughter … and with the dream of a better life for themselves and their two other children.

The industrious couple, who were always artisans, had a successful business for 15 years in the Andean city of Cusco, Peru. They started as street vendors, later taking their concept into a brick-and-mortar location.

Once in the U.S., the idea was to continue to make the same handcrafted items in their warehouse in Cusco, with siblings and their spouses running that side of the business. The sole difference – a major one – would be that the store would now be 4,500 miles north.

At first, having a storefront seemed daunting, as there were the challenges of navigating items such as commercial leases in an adopted country with different laws and a new language to learn.

So Juana and Raul were compelled to peddle their goods at Bay Area flea markets. Once ready to find a storefront again, they were advised by fellow sellers at a flea market in suburban Concord that the best place to sell their wares would be on bustling Mission Street in San Francisco – the heart of a neighborhood where many Latin American immigrants still come to start a new life. Juana and Raul took a walk between 16th and 24th streets and knew they had found their community. They landed a location, signed a rental contract and named their business Qosqo Maky, in a nod to their hometown.

Qosqo Maky’s aisles teem with everything from jewelry and colorful bags to clothes and paintings, with the offering expanded to include items from not just Peru, but from all over Latin America – perfect for gifts. In tribute to Peru, a stuffed llama doll, playfully donning sunglasses and a poncho, greets customers entering the store at 2515 Mission near 20th.

Qosqo Maky is a labor of love, and the small business is a true family affair. The couple’s children are now 30, 23 and 16 years old, with busy lives of their own, yet they still make time to work in the store on weekends. This assistance is needed, as the business is open seven days a week, the indefatigable family no strangers to hard work. Juana and Raul reside upstairs (the one-minute commute time helps!), plus they are in the Mission, the neighborhood where they feel most at home.

Recently looking to expand their business, Juana and Raul sought out a loan. They are working hard to combat the loss of some of their customer base, as Latino displacement has occurred in the Mission.

“Many of our customers have had to move to Oakland or Richmond. Mission Street is quieter than it used to be,” laments Juana.

The couple had stopped by MEDA’s Plaza Adelante, where they met Business Development Program Manager Edwin Rodriguez, who counseled Juana and Raul on MEDA’s new Adelante Fund, which was launched to provide access to capital for community-based businesses that may not able to garner a loan at conventional financial institutions. Adelante Fund’s interest rates of 7 to 9 percent are also lower than that of average business loans.

Adelante Fund was able to offer a $24,000 loan so that Qosqo Maky’s inventory could be increased and the business could be taken to the next level.

“Juana and Raul were the perfect candidates for an Adelante Fund loan. They are a community-serving business looking to grow and, once sales increase, they want to create jobs in the Mission,” explains Lending Manager Diana Matei-Golopenta of why she put her stamp of approval on Qosqo Maky’s loan. “These are hardworking neighborhood residents bettering their family’s life and building an asset.”

Matei-Golopenta is out in the Mission assessing need, aiming to dole out many more loans in 2016. The goal is to find similar community-serving businesses needing access to capital and run by industrious entrepreneurs such as Juana and Raul.

“In one year, we hope to increase our sales. Hire some employees. That’s our goal,” sums up an optimistic Raul.