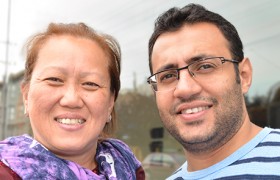 Bilingual Bank Teller program graduate Angelica Colon-Chin, now starting a successful career as an employee of Wells Fargo at its downtown San Francisco branch, needed to do her taxes last winter. That’s when Technology Training Manager Leo Sosa advised Angelica to head over to the “Taxes Plus: Go Further With MEDA!” room at Plaza Adelante, where her taxes could be prepared at no cost.

The young adult then told her aunt to do the same. So, Laurie Chin and Maged Nabawy headed over from their nearby Mission District residence to Plaza Adelante. While calculating their current year’s taxes, the astute preparer realized that the prior two years’ returns should be amended: it turns out that the prior tax preparer did not take into account the IRS’s “Nonresident Spouse Treated as a Resident” rule. This rule states that if, at the end of your tax year, you are a U.S. citizen or resident alien (even if you were not for the whole year) and married to a nonresident alien, you can choose to treat your nonresident spouse as a U.S. resident for U.S. Federal Individual Income Tax purposes.

This is an especially smart move if the overseas spouse did not have much income. Such was the case with Maged, who had been working in his native Egypt since 2011. When Maged’s income was added to Laurie’s earnings, they then got two times the standard deduction and personal exemptions on federal and state returns. The result? A $2,585 refund!

In this couple’s case, MEDA also worked with the nonprofit Bay Area Communication Access, as Laurie and Maged are both deaf and needed an interpreter for their tax sessions.

Laurie speaks of her experience at MEDA as follows: “Everyone was so nice. They set up an interpreter service for us, which was great. I was surprised at how easy the tax preparation was and it was amazing that it was free.”

It’s interesting to note that Laurie’s sister, Florence, later came to one of MEDA’s monthly Housing Opportunities sessions, this one a free workshop for first-time homebuyers.

This story showcases the service-integration model at MEDA’s SparkPoint center. It also exemplifies how a community of support can better lives, as it did for this family from the Mission Promise Neighborhood (MPN) footprint. MPN works on a two-generation approach, helping families succeed so students achieve. In the case of this family, that became a three-generation approach.

“For our tax team, helping families likes this makes our jobs meaningful. This family can take their $2,500 refund and start building assets. That’s what it’s all about at MEDA,” concludes Moy-Borgen.