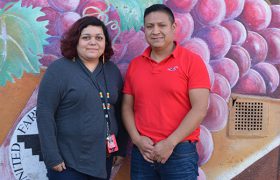 Julio Alvarado chose San Francisco’s Mission as his adopted home when he emigrated from Guatemala back in 2000. He felt immediately welcomed in his new community, so much so that when he married and had two kids, the family planted roots in the neighborhood.

That comforting sense of place became tenuous when Alvarado and his spouse, Jennifer, got an official-looking letter from their landlord.

Turns out Alvarado’s 12-unit building on Cesar Chavez Street was going to be gutted, with his apartment being taken off the market. Translation: The family had eight months to leave their two-bedroom apartment and try to find another affordable housing rental in San Francisco. A daunting task.

Alvarado and his wife were extremely worried. This led to depression once they crunched the numbers, comparing what they could afford in San Francisco versus a move to the East Bay, the latter having the additional cost of transportation back and forth to their jobs in the city and, worse yet, meaning little time to spend with their kids. With all seeming lost, the Alvarados considered moving out of state.

Daughters 10-year-old Kimberly and 12-year-old Shirley were equally stressed, their grades dropping because of an uncertain future. The children were constantly questioning their parents about where they were all going to reside; they even said they would be willing to live in a one-room flat if it meant they could stay in their current schools and not have to leave their lifelong friends and neighborhood.

Ramos-Castro (photo, left) connected Alvarado to neighborhood partner Causa Justa :: Just Cause, who sent the family to a lawyer, availed the tenants of their rights and organized the residents.

Alvarado then spoke with MEDA Housing Opportunities Coach Diana Mayorga, who worked with the family to explore below-market-rate (BMR) housing lotteries via the Mayor’s Office of Housing and Community Development (MOHCD).

The first thing to do was to put in for a Certificate of Preference based on the Alvarado family’s impending Ellis Act eviction. This paperwork greatly increases the odds of winning the housing lottery.

Mayorga also made sure the family was rental ready, meaning they had a good credit score (must be better than 650), didn’t have any collections (must be under $500) and met BMR income guidelines for the developments to which they were applying (vary by property). When clients don’t meet these requirements, a MEDA coach works with them to develop a plan to become rental ready. The good news was that the Alvarados were in decent financial shape.

Then it was time to apply for lotteries. Mayorga helped the Alvarados fill out the paperwork and send in submissions to eight BMR apartment rental developments in San Francisco. Due to the Certificate of Preference, they won the lottery at four properties, choosing 200 Buchanan as their new home. The Alvarados will be paying just $1,264 for a two-bedroom apartment.

“My family chose 200 Buchanan because it was brand new and in a safe, clean neighborhood. When we took a tour, my daughters were so happy. They couldn’t believe we were going to live there. They also knew we had found stable housing, they could stay at their schools and that we were still very close to the Mission,” states Alvarado.

The family’s relatively short move will take place this weekend.

Concludes Alvarado, “The stress is gone. I felt so supported by the community — and we never felt alone. My family is truly thankful to everyone who helped us get into our new home.”