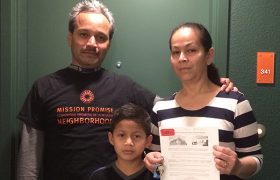 “Our bathroom is larger than the one room my two children and I used to share,” says a thankful Juana Martinez of her two-bedroom apartment at brand-new FIVE 88 in San Francisco’s burgeoning Mission Bay.

Juana (photo, right, showing winning lottery ticket) is the devoted mother of sons Eduardo, a seventh-grader at Everett Middle School, and Edwin (photo, center), a fourth-grader at Sanchez Elementary. Back in El Salvador, Juana was concerned that gang violence would soon become part of her children’s lives. So she made the difficult decision to start anew, first heading to Houston in January 2016, and then venturing to San Francisco a year ago. Some cousins and friends advised her of opportunities in the Bay Area, translating to that trip out west.

Their prior rental was that tiny room, far removed from the Mission. Because of the distance, Juana’s children needed to wake up at 5 a.m. to get to school on time. She also knew that the landlord needed her family to soon leave that rental.

To make ends meet, Juana worked six days a week at a restaurant, plus some Sundays at another eatery in Oakland. She was allowed to bring home food, which was a blessing, but her kids weren’t that interested in Italian and Filipino cuisines. These picky eaters longed for rice, beans and homemade tortillas — not easy for Juana to make in a communal kitchen.

An introduction to the BMR rental process
Juana was introduced to the possibility of a BMR rental via a flier hand delivered by Eduardo; this flier came from Mission Promise Neighborhood Family Success Coach Roberto Aparicio (photo, left). Based at Everett Middle School, Aparicio personally greets all unaccompanied minors throughout the school year, to make sure newcomer students know a caring adult at the school. This welcoming process also helps Aparicio gauge family and student needs, with the latter always getting a brand-new backpack.

Juana set up a meeting to speak with Aparicio to discuss affordable-housing options, one item denoted on the flier.

Now armed with some information, Juana was connected to MEDA Housing Opportunities Program Manager Juan Diego Castro, who helped her fill out an application for Five 88. It was just two weeks later that Juana received a voicemail from the City, but the only word the monolingual Spanish speaker recognized was “apartment.” So Aparicio came back into the picture, listened to the message and advised Juana that she had won the lottery. Great news, but the work was just beginning.

It was imperative to gather six months of bank statements and pay stubs. When Juana ran into trouble getting pay stubs from one of her employers, the stress built up as the deadline was imminent. Aparicio called the leasing agent at Five 88 and advocated on Juana’s behalf; this led to a few more days being granted, in which time the correct paperwork was received.

Aparicio later counseled Juana to bring a bilingual friend to her initial meeting with the property manager at Five 88, so she enlisted a co-worker named Celida. Aparicio then accompanied Juana to her second such meeting. Everything was now in the works.

A new home
Juana was elated when a week after her meeting with the property manager she received a call that she had qualified. It was time for a tour of Five 88, accompanied by Aparicio. They saw the terrace. The gym. The laundry room.

Then Juana was handed three sets of keys. She was at first confused until it was explained that she could choose from one of a trio of available two-bedroom units. As configurations were fairly similar, Juana asked Aparicio which of the three should she pick. He suggested an apartment that offered a view of the development’s entrance, so that she could see her boys coming into and out of the building.

Now with a stove of her own in an open-concept kitchen, Juana’s children can indulge in those handmade tortillas, loving made from scratch by their mother. The boys have bunkbeds in their own bedroom, and Juana now has the privacy every parent deserves.

Commute times have greatly decreased, older brother Eduardo escorting Edwin to Everett Middle school each weekday, as they both take the MUNI 55 bus line. Juana can get to work much faster, too, meaning more time to spend with her boys.

Juana advises others seeking affordable housing in San Francisco to know that this could also happen for them. Her main advice: Make sure your documents are always up to date.