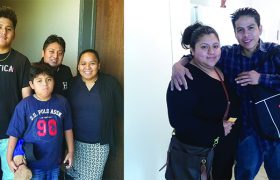 “For all families, health starts with food on the table and a roof over our heads. It warms our hearts to see the smiles on the faces of these families in their new and secure homes,” says Executive Director Brenda Storey of Mission Neighborhood Health Center (MNHC). She was speaking in general about Mission families, and specifically of the families of siblings Jazmin and Marcos Florian. MNHC has served the Mission’s Latino community for almost five decades.

Jazmin Florian, spouse Antonio Chunux and their two children (photo, left) are now in a below-market-rate (BMR) apartment rental at Abaca on Third Street in Dogpatch, while Marcos Florian and wife Jessica Alvarez (photo, right) found affordable housing at Five 88 in Mission Bay. Both are brand-new developments featuring many amenities.

To make affordable housing a reality, it took determination by the families and a partnership between MNHC and MEDA.

MNHC knows that a lack of safe, secure and quality housing can lead to major health issues.

Chronic Disease Coordinator Iran Pont explains the issue as follows: “Studies show that if you are under stress because you don’t have a home, then major health issues can occur. if you don’t have the roots of your home established, you can’t build anything else.”

That’s why MNHC’s Storey reached out to MEDA to provide affordable-housing workshops at her clinic. This formal request occurred during one of Mission Promise Neighborhood’s monthly referral network meetings, where the 20+ partner organizations share information and best practices around direct services.

Last December, Jazmin Florian attended the first workshop at MNHC, with MEDA Community Planning Manager Dairo Romero availing Latino families of the affordable-housing opportunities in San Francisco’s pipeline, plus how to get rental ready so that eligibility requirements can be met once you win the housing lottery. At this meeting, a distressed Jazmin shared with the group that her entire family was in the throes of an owner move-in eviction from their Bayview neighborhood home — a home where her family of four lived in one unit, and her brother and his spouse lived in the other flat.

Jazmin was made aware of how San Francisco’s Displaced Tenant Housing Preference (DTHP) for evicted residents could help her family win the lottery and find a new affordable home in the form of a BMR rental. So she and sister-in-law Jessica filled out the necessary DTHP paperwork. They then applied for BMR rentals at multiple properties.

Jazmin won three lotteries, but was initially denied because her family had not filed for the 2015 tax year. MEDA helped appeal Jazmin’s case with the developer, plus the MEDA tax team prepared the taxes for free. Jazmin, Antonio and their children moved into Abaca in July. Additionally, during the process of obtaining a BMR rental, Jazmin decided to become an affordable-housing advocate, even providing Board of Supervisors’ public testimony in favor of MEDA’s 1296 Shotwell affordable-housing development for seniors.

Jessica was a victor of five lotteries, but was denied at one project because of too high a household income (every development has its own minimum and maximum income requirements.) Their case for Five 88 was closed, but later reopened by Romero.

Romero states, “Our Latinos families who win the lottery need support throughout the leasing process because some developers do not offer bilingual staff. Plus, families don’t always understand what additional documents are being requested by the developers.”

Jessica was also counseled by Family Success Coach Yadira Diaz at Cesar Chavez Elementary to apply for a Hamilton Families housing subsidy that covered the required first month’s rent and security deposit. Marcos and Jessica moved into Five 88 at the end of June.

“MNHC is excited and eager to continue our collaboration with MEDA, with the goal of having many more Mission families find affordable housing in San Francisco,” concludes Storey.