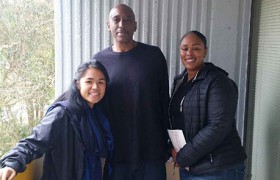 “Never in my wildest dreams could I have imagined I’d be living in Twin Peaks when I was growing up in the predominantly black Fillmore or, as it’s now called, the Western Addition,” says 60-something Ernest Herndon, who is blessed with a definite gift of gab.

It was a long road to travel the few miles from his longtime neighborhood to residing amid a forested hillside in formerly public housing at 255 Woodside in San Francisco.

Plenty happened along the way.

Life before 255 Woodside
Growing up in a Victorian a few blocks from Duboce Park on Page Street, Ernest and his younger brother had a good upbringing. His father had left Texas in 1939 for the West Coast to build ships for the wartime effort.

Once out of school, Ernest held a range of jobs, including multiple  construction gigs. He took whatever he could get … until his addiction took hold.

That led to a 15-year stint in single-room-occupancy (SRO) hotels across the city, with Ernest later being put on the waitlist for public housing, with the help of a social worker and case manager at Tom Waddell Urban Health Center. They know SRO’s would be a difficult place to maintain a clean life once Ernest beat his demons.

“I went through stuff you wouldn’t believe. I could write a book,”  laments Ernest.

A lifeline at 255 Woodside
Five years ago, Ernest (photo, center) was finally offered a unit at 255 Woodside. He was familiar with the neighborhood, as his mother had for years worked at nearby Laguna Honda Hospital. She had always dreamed of living in the serene neighborhood of eucalyptus trees.

Life was much improved at Ernest’s 255 Woodside home, but his unit and the structure itself needed work — an all-too-common issue at public housing sites in San Francisco.

That’s why the U.S. Department of Housing and Urban Development (HUD) introduced its Rental Assistance and Demonstration (RAD) program. With a $26 billion backlog of deferred maintenance at public housing sites nationwide, HUD knew that an innovative approach was needed to remedy the situation. In San Francisco, public housing has more than $270 million in deferred capital repairs on its properties. Under the RAD guidelines, San Francisco’s public housing sites  leverage debt and equity, from public and private sources, to reinvest in the public housing stock. All residents retain prior tenants’ rights, with the apartments guaranteed to remain affordable housing in perpetuity.

As the goal of MEDA’s Community Real Estate team is to produce and preserve affordable housing, the RAD program just made sense. Tackling such work also aligns with MEDA’s core values.

Explains MEDA Project Manager Leslie Palaroan (photo, left), “These buildings have strong bones, and strong communities, but many residents were living in less-than-ideal conditions due to deferred maintenance. By moving residents into healthy, rehabbed units, we are preserving their affordable housing via RAD. We are also upgrading the corridors, common spaces and community rooms, which will further strengthen the communities formed at these buildings.”

Venturing into new territory, MEDA joined BRIDGE Housing, long at the vanguard of housing development. The partners now co-manage the Phase I trio of RAD properties of the Mission-Castro Cluster: the 109 units at 255 Woodside; 90 units at 25 Sanchez Street; and 42 units at 462 Duboce Avenue. Two more RAD properties are in the pipeline — 107 units at 3580 18th Street and 92 units at 1855 15th Street.

“A quality, affordable home is a starting place for stability and wellness,” says President and CEO Cynthia A. Parker of BRIDGE Housing. “We’re proud to team up with MEDA to renew these apartments with a holistic approach that focuses on improving people’s lives.”

One life that has already improved is that of Ernest Herndon.

Ernest has moved to an apartment on the 10th floor. Unit 1010 showcases a brand-new stove, sink and refrigerator in the kitchen, plus updated fixtures in the bathroom. There is even a balcony so that he can get some of that fresh Twin Peaks air.

His previous second floor unit has been turned into a laundry room featuring new machines for all residents. The laundry room used to be located all the way of the ninth floor, which Ernest claimed was an issue, especially for elderly tenants.

“My neighbors and I really appreciate all that MEDA and BRIDGE Housing are doing to make our living situation better. I wish I had moved out of my other unit a long time ago. It was noisy — near the elevator and office. My new unit is so much better. Mama would be impressed that I’m living in such a cool place up here!” concludes Ernest.