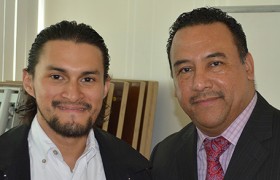 MEDA wants to celebrate a true employment success story: that of Edwin Gonzales (photo left), who came to the U.S. from El Salvador just four years ago with the goal of seeking better opportunities.

Edwin’s life has sure changed since the first day over a year ago when he nervously walked through the doors of Plaza Adelante, unsure what to expect at the Mission neighborhood center.

Meeting Leo Sosa, MEDA Technology Training Coordinator (photo right), led to Edwin taking a Customer Service workshop. When the first cohort of Mission Techies was being formed soon thereafter, Edwin was the ideal candidate, as his hobby had always been tinkering with computers, so he signed up to be part of this program for young adults ages 17-24. In this free 12-week training workshop, participants learn the history of computers, study hardware/ components, learn how to provide tech support and much more.

Sosa explains, “Since Day 1 starting the Mission Techies Program, Edwin had a dream to get a job in the tech industry. Knowing that he had to work harder than everyone else, he spent numerous volunteer hours at the Tech Center refurbishing computers–away from his program schedule.”

Once Edwin graduated from the intensive workshop, he landed an internship at Jones IT, located in San Francisco’s tech-centric mid-Market area. According to their website, “Jones IT is the Bay’s best (and friendliest) provider of Managed IT Services. Partnering with Jones IT is like having a full-fledged IT staff at your fingertips for a fraction of the cost of a full time IT department.”

Good news: thriving in this internship just led to an offer of a full-time job at Jones IT, which Edwin accepted. His tech career is now a reality. A life has been transformed.

Evan Jones, CEO of Jones It, notes the benefits to his company as follows: “As an IT services provider, partnering with the Mission Techies program is a no-brainer. We now have access to a talent pipeline that we never were able to reach before. Having recently hired Edwin as our first Mission Techie alum, we were able to cut our training cycle in half, since he was already well prepared for a job as an IT Support Engineer.”

Concurs Chris Tugwell, MEDA Workforce Manager, “Edwin getting hired at Jones IT is amazing. It rewards him for his efforts, legitimizes our sector-based training work and paves the way for other Mission Techies to follow a similar path.”