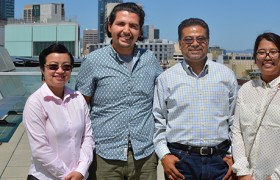 Fidgeting. Hair twirling. Foot tapping. Yes, there was an air of nervous anticipation in the air yesterday afternoon at the LGBT Community Center in San Francisco, as the lottery was conducted for below-market-rate (BMR) units at 1400 Mission, a 100 percent affordable-housing development.

There were 167 residences for 355 hopeful lottery entrants for these brand-new condos in SoMa. The good news: 33 MEDA Housing Opportunities program clients were picked out of the first 167 numbers drawn. The hard-working team of Juan Diego Castro, Diana Mayorga and Johnny Oliver breathed a collective sigh of relief at the outcome for their clients, who now can continue to call the city their home.

The background
It’s not easy to happen upon an affordable housing unit in San Francisco. A look on Zillow today showcased the San Francisco market as “very hot,” with a median home value of $1,063,200. With studios starting at $225,105 and three-bedrooms available for $327,577 maximum, the prices at 1400 Mission offered a much-needed opportunity to get into a market that is ever harder to crack. Hence the tension for these San Franciscans who needed to meet the criterion of no more than 100 percent of Area Median Income (AMI), based on household size.

These are top-rate units. There is a second-floor courtyard with a children’s play area and an 11th-floor roof terrace—both a welcome addition in a neighborhood with few parks. Add in dual elevators, a double-height resident lobby, bicycle storage, keycard-access system and energy efficiency and this is a pretty luxurious place.

The first step to participate in the lottery was to schedule and attend a first-time homebuyer workshop followed by one-on-one counseling sessions, such as those held at MEDA.

The second step was to obtain a loan pre-approval from a Mayor’s Office of Housing and Community Development (MOHCD) BMR participating lender.

William (Ko Ko) and Mimi Lay did all of the above, working with MEDA’s Housing Opportunities Program Manager Juan Diego Castro.

Twice displaced and hoping for a place to call their own
Castro had met the Lays a year ago, with the family eager to purchase a home–as soon as possible. The sense of urgency stemmed from the fact that the family was currently in litigation with their landlord, who was attempting to displace everyone in their building via Ellis Act evictions.

The Lays are originally from Burma, from which they were compelled to emigrate because of political and social injustices. William had been a philosophy student in 1988, when he joined a group of students fighting the new dictatorship. Thousands of citizens had been killed by the regime, so these students took up arms on the border.

“I was on the frontline fighting for peace,” explains William of his life as a young adult.

William migrated to the U.S. for freedom in 1992, landing in San Francisco and never venturing any farther than the city that immediately felt like home. He studied and received his degree, continuing to work for civil rights on many fronts.

To make a living, William opened a photo studio in 2007 on Capp Street between 17th and 18th streets in San Francisco’s Mission District. Life was good for William and his wife, Mimi.

That all changed on Valentine’s Day 2014, when the opposite of a love letter arrived: it was a notice of a pending Ellis Act eviction.

“I was shocked. I had regularly paid the rent. They were looking to kick me out—and this was legal. I had once been displaced from my country and I was now being displaced from my home here,” sadly states William.

The path back
When MEDA’s Castro initially met the Lays, the family’s successful budgeting and diligent saving had brought them close to the American Dream; however, their credit profiles still needed some attention. Determined to get things on track, the Lays assiduously tackled their homework received during their free coaching at MEDA. This led to their being able to increase their credit and obtain a pre-approval in time to apply for 1400 Mission.

Castro explains why the Lays’ story resonated so much with his team: “The Lays exemplify the strong family values of our community in the Mission, especially immigrant families working hard to better their lives in this country.”

The Lays sat among the packed room yesterday, ready to finally have a stable home.

When they heard their number #433249 called by the City official, the Lays’ faces beamed. Their lives had just changed. Chosen second in the lottery because of preference the City gives to victims of Ellis Act evictions, the Lays will have their choice of units at 1400 Mission.

William concludes, “I want to thank everyone that made this happen, from community organizations, such as MEDA, to politicians who saw this need for affordable housing and worked to make it happen. This has been the way to turn a crisis into an opportunity. It’s a social change.”

After congratulating his clients with a hearty hug, an equally enthusiastic Castro explained, “This family is why MEDA exists! This is a win for the Lays at a very crucial time. The family was living under negligent conditions, being the only family left litigating against an Ellis Act eviction. 1400 Mission is their vehicle to affordable housing. The family’s search for economic justice is their fuel–MEDA just tagged along to navigate.”