Years ago, the sprawling, Mission District Victorian at 2976 23rd Street @ Harrison did not hold the allure of an address on Union Street in Pacific Heights or Jackson Street in Presidio Heights. There are no “heights” in this low area that lacks quintessential San Francisco views and was anything but a tony address when most of the residents of its 14 units moved into this lower- and middle-class enclave years ago.

That Mission is long gone, with a new high-end restaurant opening on Valencia Street every other week and store windows now showcasing $150 Jonathan Adler pillows. Being within walking distance of this scene–and being in a neighborhood offering ease of US-101 and I-280 access to the tech jobs of the Peninsula and Silicon Valley–made 2976 23rd Street a target for investors looking to cash in.

On such investor willing to pay the hefty $1,780,000 price tag, despite the building being in dire need of some TLC and being blanketed by a laundromat, was looking to change the property’s use via the Ellis Act. When residents heard of this planned tactic, they approached the owners to see if they would consider the option of selling to the San Francisco Community Land Trust (SFCLT), as a means of preserving these 14 units as low-cost, shared housing, with current tenants being able to remain in their homes. SFCLT is a membership-based organization whose mission is “to create permanently affordable, resident-controlled housing for low- to moderate-income people in San Francisco through community ownership of the land.”

SFCLT Organizational Director Tracy Parent explains how this sale will work: “When the owners of this 14-unit shared rental building decided to sell the building in November 2013, the residents immediately realized they would be at risk of Ellis Act Eviction, so they reached out for help. They asked the SFCLT if it could purchase the property to preserve their affordable homes, and also asked the owners if they would work with the Land Trust. The owners were empathetic to the residents considering the rash of evictions in the Mission, and agreed to work with the the Land Trust by providing a short-term, carryback loan until SFCLT can refinance through the city’s new Small Sites Program (SSP). SFCLT’s goal is to assist the residents to form a Housing Cooperative through which they will operate and control the building, while the Land Trust maintains ownership of title to the land to ensure permanent affordability for future residents.”

To solidify plans for acquisition financing, the succor of Boston Private Bank & Trust was enlisted. This lender is a MEDA funder and respected community partner. There is also a carryback note from the sellers, BSGS Guesthouse LLC, who worked with all parties to make this happen. 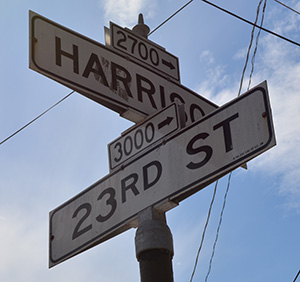 Barbara Evers, Senior Vice President and Community Investment Officer for Boston Private Bank & Trust in the San Francisco Bay Area, talks of her bank’s role: “With our long history of commitment to community investment, we are honored to be involved in the 2976 23rd Street project and want to congratulate the San Francisco Community Land Trust and our other partners on the successful planning and financing of this important development. This is the kind of initiative that Boston Private Bank is proud to be part of because of its innovative and creative ways of preserving affordable housing that would otherwise be lost to strong market pressures.”

MEDA is all too aware of the Mission District housing crunch, as evidenced by stories from the 5,100 yearly clients served at Plaza Adelante.

States MEDA Policy Manager Gabriel Medina: “During this housing bubble, with the Mission leading in Ellis Act Evictions and AirBnB listings, small-site acquisition and rehabilitation is the most seamless way for tenants to stay in their homes. But the work behind the scenes is anything but seamless. That’s why we are impressed that the San Francisco Community Land Trust and Boston Private Bank & Trust have developed this model. The Mission is not awash in large sites for new affordable housing development. If the Mission is going to maintain its working-class affordability, the Mayor’s Small Sites Program should include properties such as 2976 23rd Street.”

A piece of the Mission has been saved . . . thanks to SFCLT and Boston Private Bank & Trust.