MEDA Clients Give Thumbs Up to “Facebook for Business” Event

Turning onto interestingly named Hacker Way in Menlo Park, after a half-hour bus trip down the Peninsula from San Francisco’s Mission District, about 20 MEDA small-business clients were excited to go behind the curtain and be directly provided social media counseling from the innovators at Facebook.

All knew they were being afforded an opportunity not many get: having Facebook staff provide a presentation followed by one-on-one guidance on how to optimize a business page. The relevancy of such social media marketing is undeniable; Facebook’s numbers are staggering, with daily averages of 141 million visitors, users checking their news feed 14 times. 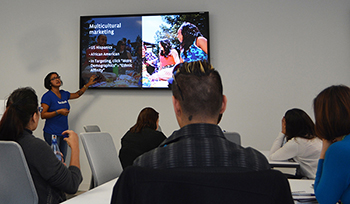 The “Facebook for Business” event commenced with a comprehensive presentation by Facebook’s Small and Medium Business, Client Services team member Daisy Galvan (photo, left). Native Californian Galvan, who is bilingual, flew in from her adopted home of Austin, Texas, where Facebook also has a campus, albeit a much smaller site than that in Silicon Valley.

Galvan explained the four steps for getting Facebook social media marketing on track: creating a page; creating posts; promotion; and managing/measuring. She emphasized that in the last decade digital marketing had become paramount to such modes as television and radio. To drive traffic and create brand awareness, a robust social media presence is a must.

Galvan then went more in depth by teaching the group about targeted marketing, such as ads tailored to “U.S. Hispanics,” specific geographic areas or Facebook users’ interests.

There was then a Q&A, with Galvan noting that Facebook has a website just for businesses, where attendees could find out further information.

Five Facebook staff then counseled these budding entrepreneurs, the latter splintered into groups to ask questions germane to their type of business. Take the case of Noe Valenzuela, a contractor looking to do business-to-business (B2B) marketing. Valenzuela knew how Facebook worked well for business-to-consumer (B2C) promotions, such as for a restaurant; however, once Valenzuela had spoken with the Facebook team, he realized how B2B marketing could also be effectively done on the social media platform.

As a generous offering, Galvan later handed each small-business client a $50 credit to start an ad campaign on Facebook. A number of eager clients already had plans to do so this evening.

“It is important for our clients to have hands-on training, so that they understand how to implement and customize social media marketing campaigns,” explained MEDA Business Development Program Manager Edwin Rodriguez. “I thank Facebook for providing this rare opportunity for our clients today.”