Just five weeks shy of her thirteenth birthday when she headed to D.C. to live in the White House, Chelsea Clinton knows plenty about public life. That early experience was the impetus for her recently released first book, “It’s Your World: Get Informed, Get Inspired & Get Going,” a primer for adolescents looking to become more engaged in their community’s issues … and those of the world.

Now a socially conscious 35-year-old, Clinton is on a rigorous, 20-city book tour, with her stopping by the Mission Promise Neighborhood’s Everett Middle School on Tuesday. Hundreds of students packed the ornate school auditorium, as they eagerly awaited Clinton’s appearance.

Clinton’s book is already educating young readers on topics running the gamut from poverty and access to education to climate change and the struggle for gender equality. All proceeds from book sales are donated to the Clinton Foundation and other charities.

A roar of applause greeted Clinton as she took to the floor after being introduced by a trio of Everett students. She spoke of her background, being in a political world at a young age. Clinton also spoke about her early travels, mostly with her mother, to places such as Sub-Saharan Africa, where, as an adolescent, she saw abject poverty and knew the issue needed to be addressed.

Such experiences compelled Clinton to tackle penning her first book, which she advised is apolitical: “When I was a kid, I loved the book 50 Simple Things Kids Can Do to Save the Earth and remember wishing there were books like it on other issues I cared about. A couple of years ago, I realized there wasn’t a book–at least one I could find–for kids today that talked about some of the big issues in our world, what’s being done and what kids could do to help make our world healthier, safer and more sustainable. This book is my attempt to do that.”

After Clinton’s talk, with students’ rapt attention, it was time for the latter to ask questions. One by one they came up to the microphone, asking such things as “How can we help endangered species?” and “How can we stop sexism?” The second question prompted Clinton’s longest answer. She explained to the shocked adolescents that there are 10 countries in the world where a woman cannot go outside without being escorted by a man. That in Massachusetts there is still a law on the books stating that a 12-year-old girl can be married, if her parents want that to occur. All in all, there were about a dozen questions for Clinton. 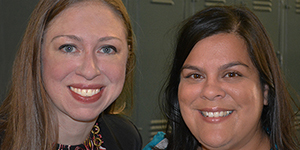 To conclude the event, Everett’s principal, Lena Van Haren, gave Clinton an idea for a second book: to tell the story of a school looking to change the world.

That school? Everett, of course.